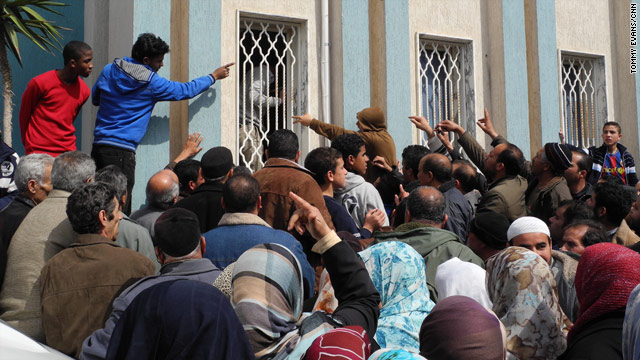 Libyans gather outside a Tripoli bank on Monday to collect promised payments of $300 each from the Gadhafi government.
February 28th, 2011
06:59 PM ET

Across the Middle East and North Africa, CNN's reporters and iReporters are covering protests, many of them inspired by revolts in Tunisia and Egypt that toppled those countries' longtime rulers. Check out our story explaining the roots of the unrest in each country and full coverage of the situation in Libya. Have a story to tell from the scene? Click here to send an iReport. CNN's Fareed Zakaria breaks down what the movements toward democracy mean.

[LIBYA, 6:59 p.m. ET Monday, 1:59 a.m. local] The Libyan ambassador to the United States, Ali Suleiman Aujali, tells CNN that his countrymen have long regarded Libyan leader Moammar Gadhafi as crazy, but that Libya has had no alternative to his rule until now.

Aujali's comment came after he reacted to Gadhafi's interview with ABC News and the BBC, in which Gadhafi said Libyans love him and want to protect him, and that the uprising that led him to lose control of Libya's second-largest city was completed by al Qaeda, not the Libyan people.

Blitzer remarked that Aujali has said that he has worked as a diplomat for Gadhafi for 40 years, and asked Aujali whether he realized during those 40 years that Gadhafi was crazy.

"Well, I think we realize that he's crazy, but we have no alternative. We have no ways to get rid of him until now, when the people" responded to the Egyptian and Tunisian revolutions with a revolt of their own," Aujali said.

[LIBYA, 5:56 p.m. ET Monday, 12:56 a.m. local] More on Libyan leader Moammar Gadhafi's interview with ABC News and the BBC: Asked why his people had captured and were holding the nation's
second-largest city, Benghazi, Gadhafi said it was al Qaeda, not the Libyan people, who had done so. "Al Qaeda," he said. "They came from outside."

ABC's Christiane Amanpour, in a posting on the network's website, said Gadhafi questioned how the international community could freeze his assets, impose sanctions and embargo arms sales based on media reports, and invited the United Nations to carry out an independent "fact-finding mission."

Ambassador Susan Rice added during the White House briefing that "when he can laugh when talking to American and international journalists while he is slaughtering his own people, it only underscores how unfit he is to lead and how disconnected he is from reality."

[LIBYA, 3:30 p.m. ET Monday, 10:30 p.m. local] Libyan leader Moammar Gadhafi on Monday denied the existence of the protests that have threatened his hold on power.

In a joint interview with ABC News and the BBC, Gadhafi also denied using force against his people. "They love me, all my people with me, they love me all. They will die to protect me, my people," he said, according to an excerpt posted on the BBC's website.

[LIBYA, 11:16 a.m. ET Monday, 6:17 p.m. local] The United States is "repositioning" naval and air forces in the Mediterranean/North Africa region to be prepared for any option that they may need to exercise, Pentagon spokesman Col. David Lapan tells CNN.

Carney also said that "exile is certainly one option" for Gadhafi and that the U.S. government is considering the possibility of imposing a no-fly zone over Libya.

This is a base where heavy weapons and ammunition that belong to the Libyan military are kept.

This area has a number of military bases that have been abandoned by the Libyan military and are now manned by troops loyal to the protesters.

[SWITZERLAND, 9:38 a.m. ET Monday, 3:38 p.m. Monday local] The people of Libya have made clear it is time for leader Moammar Gadhafi to go now, without violence or delay, U.S. Secretary of State Hillary Clinton told the U.N. Human Rights Council in Geneva.

[EGYPT, 6:40 a.m. ET Monday, 1:40 p.m. Monday local] Egypt's attorney general will seize all of the properties of former President Hosni Mubarak and his family and bar then from traveling outside the country, authorities said.

[OMAN, 4:35 a.m. ET Monday, 1:35 p.m. Monday local] The sultan of Oman has ordered the hiring of 50,000 citizens in the aftermath of weekend protests that left at least one person dead and 11 others injured, state-run media reported.

[LIBYA, 3:32 a.m. ET Monday, 10:32 a.m. Monday local] The Libyan ambassador to South Africa told journalists Monday he will not step down from his position despite resignations by colleagues who worked for Libyan leader Moammar Gadhafi's government.

Abdullah Alzubedi said he still needs "to serve the needs of Libyans living in South Africa and help South Africa evacuate its citizens," but said Gadhafi "should take the ultimate decision to step down in the interest of Libya."

But Gadhafi seemed increasingly cornered as security forces defected to the opposition in a town near the capital and the United Nations Security Council voted for tough restrictions and possible war crimes charges against the Libyan regime.

[LIBYA, 1:08 a.m. ET Monday, 8:08 a.m. Monday local] British Prime Minister David Cameron says a military-led rescue mission into the Libyan desert was "the right thing to do," despite the fact that U.K. planes didn't have permission to enter Libyan airspace.