The Biden administration is withdrawing its vaccination and testing regulation for large businesses after the Supreâ€twitter.com/i/web/status/1â€¦Hw

The second NYPD officer who was shot while responding to a domestic incident in Harlem last week has died, commissiâ€twitter.com/i/web/status/1â€¦HL

The White House says a Russian invasion of Ukraine "remains imminent," even as diplomatic efforts to defuse the criâ€twitter.com/i/web/status/1â€¦5A

10 Oath Keepers, including leader Stewart Rhodes, plead not guilty to sedition charges linked to the US Capitol attâ€twitter.com/i/web/status/1â€¦Cc 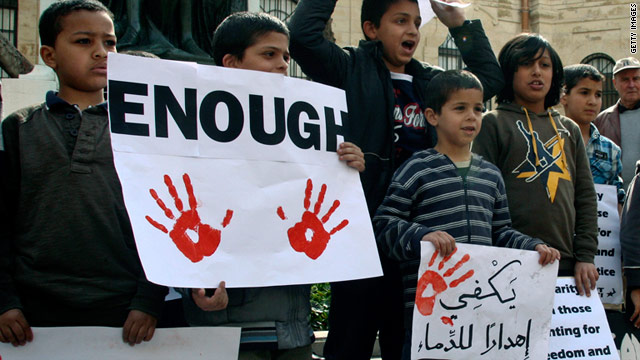 Children in Malta protest Libya's Moammar Gadhafi on Sunday. Malta has been at the center of evacuations from Libya.
February 28th, 2011
11:38 AM ET

Libya - It's Day 14 of a massive, and often violent, uprising to force Libyan dictator Moammar Gadhafi to step down. CNN's Nic Robertson has been in Zawiya, a town about 40 miles from Tripoli, and watching as crowds of Qadhafi opponents grow. Gadhafi clings to power despite members of the country's security forces deciding to defect and join the protesters over the weekend.

Abdullah Alzubedi, Libya's ambassador to South Africa, told journalists Monday that Gadhafi should leave office and that he would not continue to work for Gadhafi if the leader survives the popular uprising. But Alzubedi said he will not quitÂ despite resignations by other Libyan officials because he said he must "serve the needs of Libyans living in South Africa and help South Africa evacuate its citizens."

Britain is among the governments that have frozen Gadhafi's assets. AÂ  breakdown of protests across North Africa and the Mideast shows differencesÂ in each country's uprisings, including Tunisia. Massive street demonstrations thereÂ are credited with creating the wave of pro-democracy movements in the region.

Wisconsin - Protesters fighting legislation that would affect the rights of unions continue to camp out at the state Capitol in Madison. They are beating drums, chanting and shouting, "Kill the bill!" They celebrated when police decided not to kick them outÂ of the Capitol early Monday.

Wisconsin Gov. Scott WalkerÂ saidÂ layoffs might be coming if theÂ state budget gap cannot be addressed, and he has said the legislation will ease money woes. The protests have created a firestorm around the country, and the liberal activist group Moveon.org heldÂ rallies over the weekend in solidarity with Wisconsin demonstrators.

Meanwhile, demonstrations by public workers, especially teachers, are heating up in Indiana and Ohio, where state budgets areÂ in the red. Are you protesting? Send images and video to CNN.com's iReport. For moreÂ on states' budget woes,Â check outÂ  CNN.com's look at budget deficits.

Oscars - "The King's Speech" won the Oscar for best picture, one of four trophies for the film aboutÂ a British monarch who overcomes a speech impediment to lead his people through World War II.Â Colin Firth, who won best actor for his portrayal of George VI,Â told CNN's Piers Morgan recently that he doesn't support England's monarchy.

"The Social Network" won three Oscars. But much of the Oscar big buzz concerned whether first-time hosts Anne Hathaway and James Franco flubbed. Franco was criticized for seeming flat and out of it, and some said Hathaway was too perky.Â But presenterÂ Kirk Douglas, 94, found an audience (or an audience found him) on Twitter, and everyone looked really great. Check out the winners' list.

Neil Young wants his songs removed from Spotify because he says the platform is spreading Covid-19 vaccine misinforâ€twitter.com/i/web/status/1â€¦fx
cnni

3:00 am ET January 26, 2022 RETWEET
Saturn's innermost moon, which resembles the Death Star from Star Wars, may be a "stealth" ocean world, according tâ€twitter.com/i/web/status/1â€¦wU
cnni

2:30 am ET January 26, 2022 RETWEET
The eruption this month of an underwater volcano near Tonga was hundreds of times more powerful than the Hiroshimaâ€twitter.com/i/web/status/1â€¦RL
CNNweather

2:13 am ET January 26, 2022 RETWEET
About 4,000 people have summited Mount Everest, the world's highest peak. And only eight of them have been Black.â€twitter.com/i/web/status/1â€¦6C
cnni

2:00 am ET January 26, 2022 RETWEET
Elton John's concerts at American Airlines Center in Dallas have been postponed after the singer tested positive foâ€twitter.com/i/web/status/1â€¦Vd
cnni