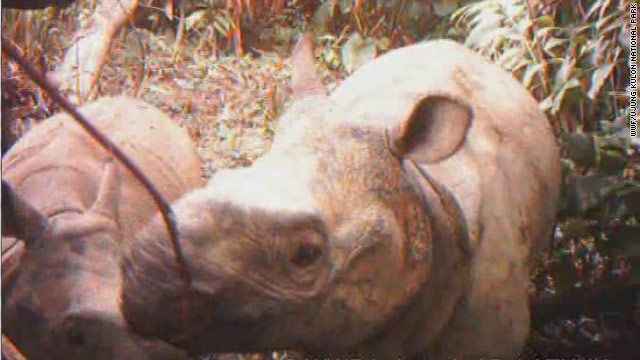 A mother and male Javan rhino calf are shown in this image taken from video shot in December.
February 28th, 2011
12:01 PM ET

Remote video cameras in Indonesia's Ujung Kulon National Park have photographed images of two Javan rhino calves, bringing new hope for a species thought to number no more than 50 in the wild.

The calves, one male and one female, were recorded in November and December in the park in southwestern Java, the World Wildlife Fund-Indonesia said Monday.

The two calves bring to 14 the number of calves identified in the park in 10 years, according to the organization and park authorities.

â€śThis female calf documentation is a breath of fresh air for us - and Javan rhino conservation in general - since (the) majority of calves we identified previously was male. This is good news to ensure that the population is viable,â€ť Adhi Hariyadi, project leader of World Wildlife Fund-Indonesia Ujung Kulon Program, said in a statement.

The Javan rhino is believed to survive in the wild only in Ujung Kulon and in much smaller numbers in Cat Tien National Park in Vietnam, according to the World Wildlife Fund.

The rhinos' numbers were slashed by poaching, but the organization said there have been no recorded poaching deaths of the Javan rhino in Ujung Kulon in more than 20 years.

With the discovery of the rhino calves, the WWF said it will try to move some of the Javan rhinos in Ujung Kulon to a newly established conservation area later this year.

"Establishing a new population is an essential buffer against a potential tsunami and an outbreak of disease and/or poaching," WWF spokeswoman Caroline Behringer said in an email.

7:13 pm ET January 17, 2022 RETWEET
The parents of Austin McEwen, one of the six victims killed after a tornado pummeled an Amazon warehouse in Edwardsâ€twitter.com/i/web/status/1â€¦dQ
cnni