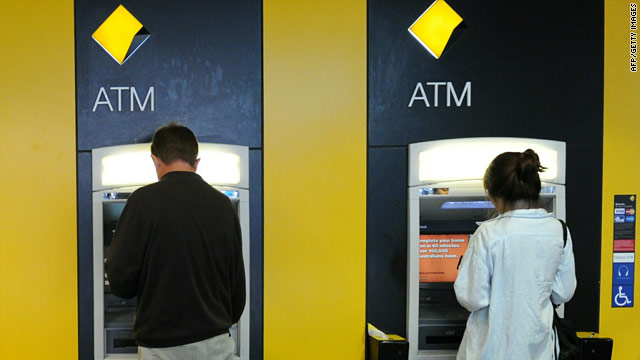 Some Australians received more than they bargained for Tuesday from Commonwealth Bank ATMs.
March 1st, 2011
07:58 AM ET

An Australian bank was mortified Tuesday to discover many of its automated teller machines were handing out large amounts of extra cash to customers, media there reported.

"They could take out $500 even if there was only $100 in their account," a Commonwealth Bank spokesman told the Sydney Morning Herald.

About 40 Commonwealth Bank ATMs were being unusually generous for several hours because of a network problem that occurred during routine maintenance, according to the Morning Herald.

The same problem earlier in the day had shut down the bank's online and telephone banking, The Australian reported.

Those who hit the jackpot won't be able to keep their windfalls. Not legally, anyway.

"People should realize that even though an ATM has dispensed cash, they are not entitled to that money and are committing a criminal offense if they keep it," Detective Superintendent Colin Dyson of the New South Wales police said in a written statement.

"They should also realize that ATM locations are covered extensively by surveillance," Dyson noted.

Twitter lit up with people reporting long lines at Commonwealth ATMs across the country.

One of the most re-tweeted remarks originated with the Australian TV celebrity show "The 7PM Project," which said: "They might have cancelled Two And A Half Men, but Charlie Sheen's got a new job. He's in charge of the ATMs at the Commonwealth Bank."