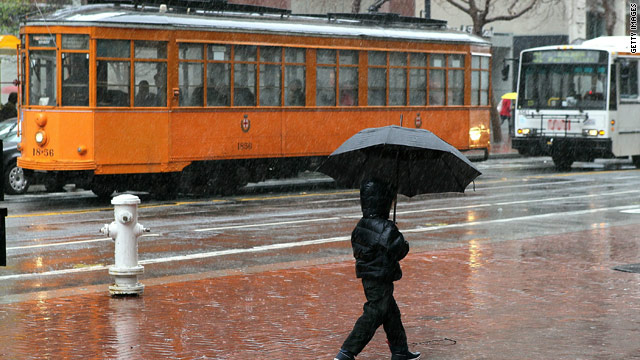 Rain drenches San Francisco last month, but it's during summer when sewers emit a rotten-egg smell.
March 1st, 2011
07:21 AM ET

The city of San Francisco's push for low-flow toilets is saving water - at a smelly price.

But the cost is both monetary and olfactory.

Because water flow isn't pushing the waste through the system fast enough, a stinky sludge is building up in the sewers, the Chronicle reports. It's blamed for a rotten-egg smell wafting through areas of the city, especially during summer, according to the report.

So the city is spending $14 million to buy a three-year supply of concentrated bleach to combat the sewer odor, disinfect treated water before it's pumped into San Francisco Bay and sanitize tap water.

The plan is drawing criticism from environmental advocates.

"Using sodium hypochlorite, commonly known as bleach, is the equivalent of using a sledgehammer to crack an egg; it's the wrong tool, and it will cause irreversible collateral damage," San Francisco chemical engineer Adam Lowry and German chemist Michael Braungart wrote in a Chronicle op-ed.

Their solution to the stink: either dumping hydrogen peroxide into the sewers or "a pro-biotic solution, that is, enzymes or bacteria that would simply 'eat' the smell then degrade harmlessly."