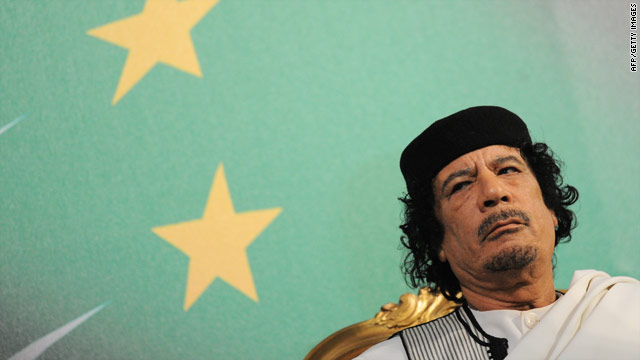 Moammar Gadhafi was warned by the head of the United Nations that "further action may well be necessary" against his regime.
March 1st, 2011
09:00 PM ET

[LIBYA, 10:00 p.m. ET, 5:00 a.m. local] The Canadian government has frozen $2.3B (CDN) in assets tied to the Libyan government, President Gadhafi and those associated with Gadhafi, a government spokeswoman said. The assets were frozen after Canada enacted sanctions over the weekend, Canadian Foreign Affairs spokeswoman Lynn Meahan said.

[LIBYA, 6:47 p.m. ET, 1:47 a.m. local] ÔªøIn Libya, the rivals for power appear to be heading a stalemate. CNN's Nic Robertson explains what's happening in the capital, Tripoli, why two cities in rebel control could be key to the country's future, and why neither side has the power to dislodge the other completely.

[LIBYA, 4:13 p.m. ET, 11:13 p.m. local] The U.N. General Assembly has adopted by consensus a resolution to oust Libya from its seat on the 47-member Human Rights Council.

[WASHINGTON, 2:52 p.m. ET] U.S. Defense Secretary Robert Gates said Tuesday he has directed the Navy ships USS Kearsarge and USS Ponce to the Mediterranean as the United States positions ships in the region near Libya. The focus is on humanitarian assistance and evacuations, and there has been no authorization for use of force, he said.

[YEMEN, 12:01 p.m. ET, 8:01 p.m. local] Yemeni President Ali Abdullah Saleh fired the governors of five of the nation's provinces, where anti-government protests have unfolded for several weeks. All five were appointed to other positions, according to a decree released Tuesday.

[WASHINGTON, 10:29 a.m. ET] U.S. Secretary of State Hillary Clinton said Tuesday that the United States has "joined the Libyan people in demanding that (Moammar Gadhafi) must go - now, without further violence or delay - and we are working to translate the world's outrage into action and results."

[IRAN, 10:12 a.m. ET Tuesday, 6:42 p.m. local] Security forces clashed with protesters and fired tear gas Tuesday in front of Tehran University, the opposition website Kaleme reported. Witnesses told CNN that police were out in force on the streets of the Iranian capital in anticipation of demonstrations called for Tuesday by supporters of two key opposition leaders.

In a counter-demonstration, thousands of government loyalists descended in the city's Tahrir Square.

[LIBYA, 3:30 a.m. ET Tuesday, 10:30 a.m. local] The European Parliament is scheduled to discuss the turmoil in Libya on Tuesday, a day after the U.S. Ambassador to the United Nations said Moammar Gadhafi sounded "delusional" and a Libyan woman said protesters will eventually succeed in ousting Gadhafi because "too much blood has been shed."

"Let's not¬Ý get carried away by the drums of war, because the United States, I¬Ý am sure that they are exaggerating and distorting things to justify an¬Ý invasion," Chavez said Monday, according to Venezuelan state media.

Chavez is a longtime ally of Gadhafi.

On Monday, anti-government protesters in the key port city of Sohar refused to end protests despite orders from the sultan to hire 50,000 people and pay a stipend to people who are out of work, sources in the Gulf state told CNN.

The demonstrations come a day after the country's main opposition bloc rejected Saleh's call to form a unity government until elections to replace him are held. The bloc said its goal is simply "the fall of the regime."

BP, Chevron, ExxonMobil, Shell and TotalEnergies raked in a record $199.3 billion in profits in 2022. The scale of‚Ätwitter.com/i/web/status/1‚Ä¶YS
cnni

BP, Chevron, ExxonMobil, Shell and TotalEnergies raked in a record $199.3 billion in profits in 2022. The scale of‚Ätwitter.com/i/web/status/1‚Ä¶YS
cnni

12:55 pm ET February 8, 2023 RETWEET
Authorities in Quebec said two children have died and six others were taken to area hospitals with injuries after a‚Ätwitter.com/i/web/status/1‚Ä¶On
cnnbrk

10:19 am ET February 8, 2023 RETWEET
Ukrainian President Zelensky is visiting the UK today for the first time since Russia's invasion of Ukraine, Downin‚Ätwitter.com/i/web/status/1‚Ä¶wz
cnnbrk