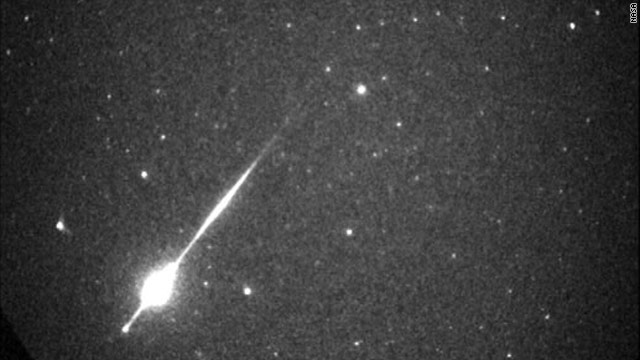 Some folks make a wish when they see a shooting star. If they wish to know what they saw, where it came from and where it went, that wish may soon be granted.

NASA is establishing a network of small cameras to watch the night sky for meteoroids. Computers will crunch the data the cameras gather, using a method called triangulation to plot the streaking objects' paths.

"If someone calls me and asks 'What was that?' I'll be able to tell them," said William Cooke, head of NASA's Meteoroid Environment Office. "We'll have a record of every big meteoroid that enters the atmosphere over certain parts of the U.S. Nothing will burn up in those skies without me knowing about it."

All cameras in the network send their fireball information to Cooke and to a public website.

What are commonly called shooting or falling stars can be bits of dust from the moon, the tail of a comet, the asteroid belt or pieces of man-made space junk falling back to Earth. As these objects enter Earth's atmosphere, they heat up and glow.

Space scientists often can tell what an object was by which part of the sky it came from and its angle of flight. And by following the trajectory using the new cameras, they might be able to figure out where more of them land, Cooke said.

Cooke is looking for schools, science centers and planetariums to host his cameras. Details can be found here. He also has materials for teachers to help students become amateur meteoroid hunters.

11:47 pm ET January 24, 2021 RETWEET
‚ÄúEven though the family [took] Boncuk back home she managed to escape every day to wait at the hospital gate,‚ÄĚ a twitter.com/i/web/status/1‚Ä¶9NtOfM
cnni