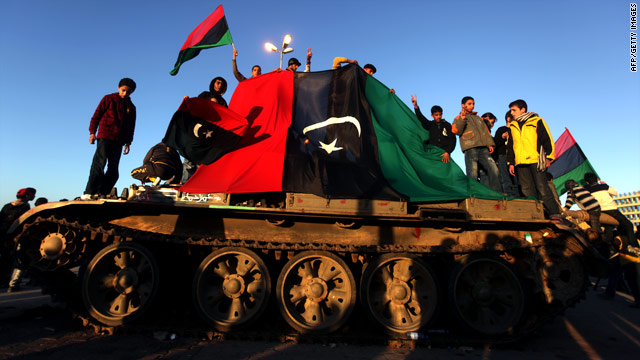 Libyan anti-Gadhafi protesters wave their old national flag on an abandoned tank in Benghazi on Monday.
March 1st, 2011
11:07 AM ET

On the Radar: Day 15 of Libyan protests, Sheen on CNN, Florida wildfires

Libya - Susan Rice, the U.S. ambassador to the United Nations, is calling Libyan dictator Moammar Gadhafi "delusional." Her remark followed Gadhafi's ABC interview in which he insisted that there are no protests in Libya and that citizens "love" him. It is actually day 15 of massive protests in the chaotic country. Thousands are demanding Gadhafi's ouster, as the world wonders what would happen if he did step down. Enigmatic and eccentric, he has ruled Libya for more than 40 years. As night fell Monday, forces loyal to him tried to retake the town of Zawiya with tanks and anti-aircraft guns, an opposition leader said Tuesday. The town, which is a short drive from Tripoli, the capital, seemed to be in control of those who oppose Gadhafi, so the pro-Gadhafi crowd was stopped, the opposition leader said. CNN journalists are on the ground in Libya and across the Middle East and North Africa to bring you background on the crisis in Libya. Other countries across the region have seen unprecedented protests calling for changes in government to reflect a more democratic models. CNN's Fareed Zakaria breaks down the history that led to the uprisings, and he urges the U.S. to recognize Libya's new provisional government led by anti-Gadhafi forces. What are the U.S.'s options for Libya? The Obama administration has said nothing is off the table.

Charlie Sheen - Charlie Sheen continued his nonsensical ranting Monday on CNN's "Piers Morgan Tonight." He said that he has results of a test that showed him to be drug free. "I'm super-bitchin' [and] I don't believe myself to be an addict," Sheen declared. His recent rants, speculated to be some kind of drug-addled meltdown, have been major headlines since reports of a high-profile night of debauchery with prostitutes that ended when he was rushed to a hospital for severe pain. In the past few weeks, Sheen has repeatedly texted journalists and given interviews to a radio show during which he has insulted his former bosses at his hugely popular sitcom "Two and a Half Men." The show was canceled. When Morgan asked Sheen if he felt any responsibility to act as a role model because the sitcom was a family-oriented comedy, Sheen replied that he thought the show's content wasÂ  "juvenile or gross." Sheen also said Sean Penn and Mel Gibson had reached out to him to offer advice, and denied that he is violent toward women. Sheen remarked, "I'm still alive, which is pretty cool." Time magazine wonders today if Sheen is bipolar.

Florida wildfires - Firefighters are having a tough time getting a big wildfire under control in central Florida. About 20 miles of Interstate 95 are closed. Officials say the blaze has burned about 10,000 acres. Heavy winds and dry conditions are fueling the flames.

Union protests - Wisconsin Gov. Scott Walker warns of dire consequences, including layoffs of state workers, if Democratic state senators don't return to the legislature in Madison to vote on the budget. The budget plan the governor will unveil Tuesday has led to protests by throngs of public employees who are enraged that lawmakers would consider ending their right to collective bargaining. Polls indicate there is growing support for Wisconsin's public workers. Protests about similar union issues are heating up in Indiana and Ohio. Background on those protests can be found here.