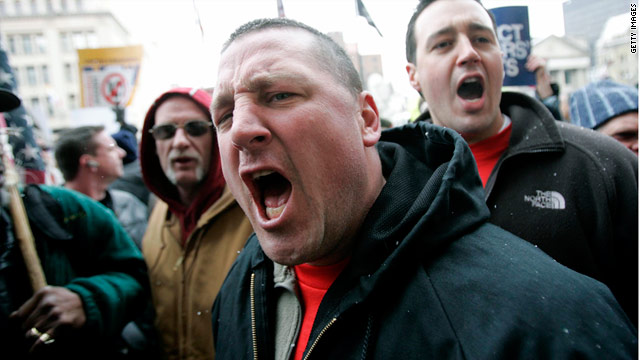 As Wisconsin's pro-union protests rage, a huge crowd in Ohio is gathering Tuesday for the event "Rally to Save Ohio's Middle Class." The movement, which reportedly could draw 20,000 people, is being documented live on Facebook. The AFL-CIO also is tweeting the event.

Protesters are demanding lawmakers drop a bill that would end Ohio public employees' right to collective bargaining. An Ohio Senate committee has said it will revise and vote this week on the legislation that would affect about 350,000 state workers, teachers, public safety employees and others.

And in Indiana, lawmakers have stooped to name-calling in a debate that pits union forces against legislators who want to undo union rights.

Are you in the middle of any of it? Send an iReport.

Though the stakes are different in each state, what is clear is that a fight in Wisconsin has ballooned into a huge national debate pitting Republicans against Democrats. President Barack Obama voiced his support for public workers Monday, and the liberal activist group Moveon.org has been staging demonstrations across the nation in support of unions.

The debate is loaded with nuance and complexity, and informed by the history of unionizing in the United States, Slate points out. USA Today analyzed the numbers and on Tuesday reported that Wisconsin is one of 41 states where public workers earn higher average pay and benefits than private workers in the same state.

The Columbus, Ohio, City Council opposes legislation in its state because members say it would hurt families, CNN affiliate WBNS-TV in Columbus reported. The council said it wants more discussion on ways to fix the state budget shortfall.

"We want to sit across from our police officers and our firefighters," council member Zach Klein told WBNS. "We want them to know that we're supporting our teachers and other working families, to have an arms-length, reasonable conversation about wages and benefits, and that's exactly what collective bargaining has done."

In Mahoning County, Ohio, Democrat David Betras decried the bill as an "assault on middle class values," according to CNN affiliate WKBN-TV in Youngstown. He told the station, "It puts political patronage and cronyism back into our public employees. We want to keep that out. Public employees do a good job. ..."

E-mails from as far away as Germany and Scotland have been flooding the offices of House members, The Columbus Dispatch said. One office reported receiving more than 10,000 e-mails, according to the paper.

Protesting hasn't gotten as heated as the political rhetoric in Indiana. Lawmakers started the week by meeting behind closed doors at an Urbana hotel to negotiate legislation. It went downhill quickly.

State Rep. Charlie Brown, a Gary Democrat, called Republican House Speaker Brian Bosma a "windbag," CNN affiliate WRTV-TV in Indianapolis reported. "He's a 6-foot-4, 230-pound windbag," Brown said. "He doesn't know how to negotiate. He doesn't know how to move his ego aside and get down to the nitty-gritty."

Brown told the station that Bosma had "backed himself into a corner" and "doesn't know how to fight his way out of it." Republican Gov. Mitch Daniels referred to Democrats spending time in the hotel's pool and hot tub, WRTV reported.

In Wisconsin, Republican Gov. Scott Walker has threatened massive layoffs if his bill limiting collective-bargaining rights for public-sector employees doesn't pass. The bill also would force public workers to cover more of their retirement plans and health care premiums. Watch Walker discuss the bill and the state's projected $3.6 billion budget gap by 2013. Wisconsin's 14 Democratic senators have left the state and gone to Illinois to prevent a quorum of 20 votes needed for the budget repair bill to pass.

Passage of the bill would limit collective bargaining to wages. Any pay increases beyond the rate of inflation would be subject to voter approval.

Pro-union forces say the governor is trying to curb long-held labor rights under the guise of fiscal responsibility.