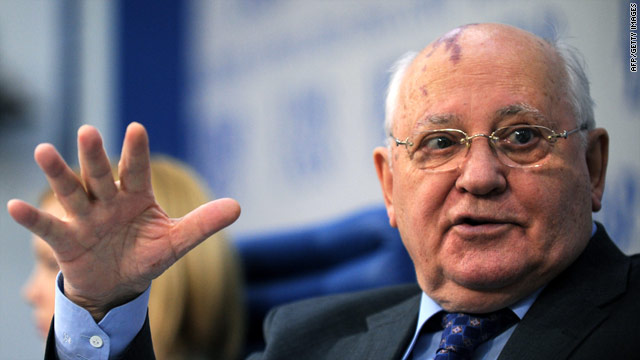 Since 1990, Gorbachev has been blamed for Russia's demise and failed reforms. Still, he defended the institutions now in place, including a legal system to support democracy.

Gorbachev addressed a report that Putin and President Dmitry Medvedev plan to sit down in private and decide who will run for president in 2012.

"I do not like how they are acting," Gorbachev said. "This is not Putin's - this is the nation's business. This is the decision of those who vote."

The Al Jazeera journalists tell the Global Daily Post that they were detained by the U.S. military in Afghanistan while covering a NATO airstrike that may have killed 67 civilians.

Nizami, a stringer with Al Jazeera's Arabic service, said that while departing Ghazi Abad Air Base he was detained, transported by helicopter and forced to stand outside in the snow without warm clothing while being interrogated.

Al Jazeera confirmed that Sahel, who works for its English services, was also detained.

After 28 hours, the two were released with their material intact. A military spokesman said the men were carrying no credentials.

Her image became iconic in 1963 when she appeared arm-in-arm with the nation's balladeer on the cover of "The Freewheelin' Bob Dylan."

In his 2004 memoir, Dylan said he could not take his eyes off the 17-year-old Rotolo when he met her.

"We started talking and my head started to spin," he said.

The two lived in Greenwich Village and were together for three years. He wrote many songs about her, including the bitter "Don't Think Twice, It's All Right" after they parted ways.

Rotolo heavily influenced a pre-stardom Dylan with her views on civil rights.

"She was into this equality-freedom thing long before I was," Dylan said.

While Rotolo avoided questions about him for most of her life, in 2008 she released a book, "A Freewheelin' Time: A Memoir of Greenwich Village in the Sixties."