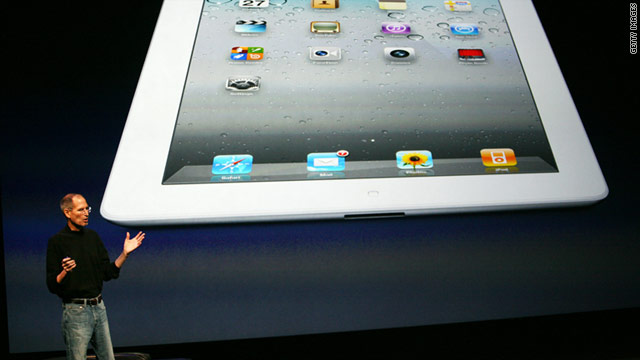 Apple unveils iPad 2: Okay, what's white and black and read all over? If you're thinking the second-generation iPad, which Apple CEO Steve Jobs unveiled Wednesday, then you've jumped the gun. But after March 11 release date? All bets are off.

17-year inmate was innocent, DA says: Houston prosecutors are asking a court to formally exonerate a Texas man after DNA tests ruled out his guilt in a rape for which he served 17 years in prison.¬ÝGeorge Rodriguez was freed in 2004 after an appeals court found that faulty scientific evidence had been used against him in his 1987 trial.

Two U.S. airmen killed in Germany shooting: A 21-year-old man from Kosovo is in custody after two U.S. airmen were killed and two others were wounded Wednesday in a shooting incident on a U.S. military bus at Germany's Frankfurt Airport, authorities said.

The man who hipped us to bi-winning: In 24 hours, actor Charlie Sheen managed a marathon of appearances that kept viewers enthralled.¬ÝHis acting is sitcom gold. His quotes are comedy platinum. Why can't we look away?

7:45 am ET October 24, 2021 RETWEET
This Ukrainian airline company has decided to put an end to heels and pencil skirts after collecting feedback from‚Ätwitter.com/i/web/status/1‚Ä¶Vh
cnni