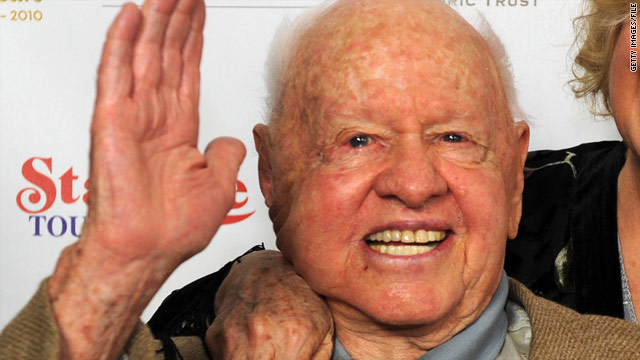 Actor Mickey Rooney was granted court protection after alleging that his stepson abused him.
March 2nd, 2011
11:09 AM ET

The 90-year-old actor will appear Wednesday on Capitol Hill, testifying on elder abuse before the Senate Special Committee on Aging. Rooney recently was granted court protection - and saw his finances placed with an independent conservator - after alleging that his stepson was physically and emotionally abusing him, the Los Angeles paper reported.

Rooney, who began in vaudeville, is perhaps best known for starring in the "Andy Hardy" films as well as musicals with Judy Garland, who died in 1969.

The coach of a Texas girls basketball team gave birth to a girl Friday night after a tournament game - and was coaching on the court the next day, according to CNN affiliate KTXA-TV in Dallas/Fort Worth.

Branson coached her Lipan High School basketball team to a victory Friday night, then gave birth to baby Leslie at 10 p.m., the station said. She was back on the court at 2 p.m. Saturday to lead the Lipan team to a victory that qualified them for the state finals.

â€śI just wanted to be with the girls,â€ť Lipan told KTXA. â€śDuring the game I was fine as long as I was standing. I think emotion and adrenaline and everything else kept me going."

The 43-year-old director general of Al-Jazeera gave a passionate speech Tuesday at the annual TED conference in Long Beach, California. He described the new generation of young Arabs behind the Mideast uprisings as well-educated, well-connected and sharing the "universal values" needed to overthrow the "politically elite, authoritarian dictatorships" that have controlled the Arab world for decades, according to the Creativity Online site.

Saying Al-Jazeera is "not a tool of the revolution," Khanfar said protesters are relying on the network to cover their stories and protect them from violent backlash, the Creativity report said.

The Chinese government has announced sanctions against 28 high-ranking officials under former US President Donald Tâ€twitter.com/i/web/status/1â€¦we
cnni

10:55 pm ET January 20, 2021 RETWEET
The Oval Office has visibly transformed in both dramatic and subtle ways to reflect the taste and politics of the oâ€twitter.com/i/web/status/1â€¦h6
cnni