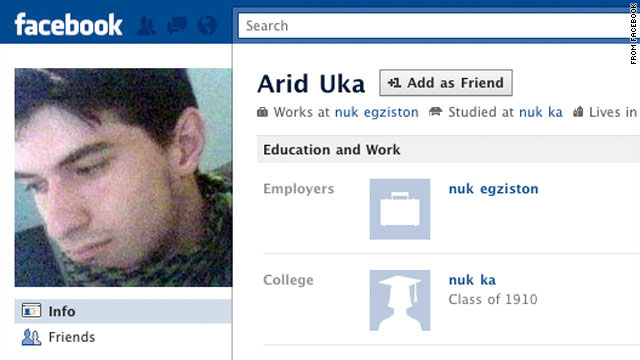 Arid Uka is in custody after two American troops were killed and two injured at a German airport.
March 3rd, 2011
07:33 AM ET

The man who shot and killed two American troops in Germany Wednesday was a recently radicalized Muslim whose aim was to kill American soldiers, a German official said Thursday.

The suspect seems to have been acting on his own, but had spent time on local radical Islamist websites, said Boris Rhein, interior minister of the German state of Hesse, where the shooting took place.

The 21-year-old man from Kosovo is in custody after two U.S. airmen were
killed and two others were wounded Wednesday in a shooting on a U.S. military bus at Frankfurt Airport, authorities said.

The suspect is named Arid Uka, from the northern town of Mitrovica,
Kosovo's interior minister, Bajram Rexhepi, told CNN, citing the U.S. Embassy in Pristina as his source.

7:33 pm ET October 25, 2021 RETWEET
Weeks after his special "The Closer" was criticized for its jokes aimed at transgender people, Dave Chappelle has aŌĆtwitter.com/i/web/status/1ŌĆ”zW
cnni