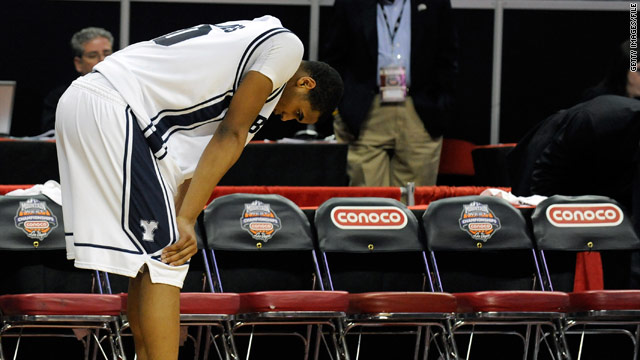 Brigham Young University center Brandon Davies has been suspended for the rest of the season.
March 3rd, 2011
11:11 AM ET

No. 3 BYU loses after dismissing player for honor code violation

Sticking to principles appears to carry a steep cost for the nation's third-ranked college basketball team.

A day after Brigham Young University dismissed center Brandon Davies from the team for violating the school's strict honor code, the No. 3-ranked Cougars were throttled Wednesday by unranked New Mexico.

"The honor code really reflects who we are as a university. It defines us and it does make us different," BYU spokeswoman Carrie Jenkins told CNN affiliate KSTU-TV.

Davies, a 6-9 sophomore from Provo, was the team's top rebounder and third-leading scorer. He received the Cougars' Academic Excellence award last season, according to an online profile.

BYU had been gunning for a high seed in the upcoming NCAA Tournament, but the team's fortunes took a tumble with Wednesday night's 82-64 loss to New Mexico.

University officials said Davies admitted violating the honor code at BYU, which is owned and operated by The Church of Jesus Christ of Latter-day Saints, also known as the Mormon Church.

The honor code requires all faculty, staff and students to:

The code forbids homosexual behavior and bars members of the opposite sex from going beyond the lobby of the school's single-sex dormitories.

The dress and grooming standards forbid beards, tattoos and piercings for men and short or form-fitting clothes or bare feet in public for women.

The university did not say which part of the code Davies violated, but it did say he had not committed a crime. Davies' future as a student at BYU and his status for next season have yet to be determined.