A two-dose version of Johnson & Johnson's vaccine is 94% effective against Covid-19, the company says, making it coŌĆtwitter.com/i/web/status/1ŌĆ”6p

BREAKING: Moscow was responsible for killing Alexander Litvinenko, a Russian spy poisoned in London in 2006, the EuŌĆtwitter.com/i/web/status/1ŌĆ”EF 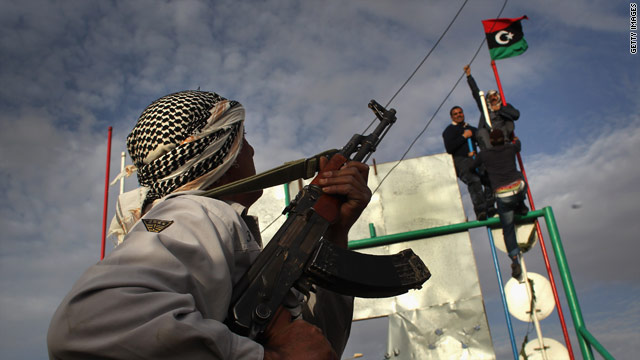 Rebel fighters hoist their flag in the Libyan city of al-Brega on Wednesday after advancing on government forces.
March 3rd, 2011
12:05 PM ET

Gadhafi fights back - Forces loyal to Libyan leader Moammar Gadhafi are fighting to hold or regain control of rebellious areas. Two bombs were dropped Thursday on military camps in the eastern Libyan town of Ajdabiya, a tribal leader said. Another bomb was dropped in al-Brega between an oil facility and the airport, but there were no injuries or damage, witnesses said. Al-Brega, which has key oil and natural gas facilities, also was bombed Wednesday.

Security Council meeting on Ivory Coast - The U.N. Security Council is set to meet Thursday to discuss the violence and instability in Ivory Coast, where incumbent Laurent Gbagbo and apparent election winner Alassane Ouattara
are struggling for control. The council will get a briefing from the U.N. peacekeeping director. The situation is alarming, U.N. diplomats and officials say.

Obama hosts Mexican president - Mexican President Felipe Calderon visits Washington, where he'll meet with President Barack Obama at the White House. It will be the fifth time the leaders have met since January 2009. Calderon arrives in Washington after making harsh statements criticizing both the U.S. ambassador to Mexico and American security agencies.

King beating was 20 years ago - Thursday marks the 20th anniversary of the beating of Rodney King by Los Angeles police officers, which led to four nights of rioting after three officers were acquitted and a mistrial declared for the fourth. CNN anchor Don Lemon retraces the beating, the riots and the lessons learned in "Race and Rage - The Beating of Rodney King." The documentary debuts at 8 p.m. ET and PT Friday on CNN.

NFL negotiation deadline looms - The NFL owners and players union are meeting in Washington as they try to beat an 11:59 p.m. deadline to negotiate a new collective-bargaining agreement. Without an agreement or an extension, a lockout of players could start Friday. The two sides are trying to hash out an agreement on revenue sharing, the length of the season and a rookie salary scale.

Florida wildfires close highway - Wildfires in Florida have burned more than 17,000 acres and closed a stretch of Interstate 95. The fires, which began Monday in northern Brevard and southern Volusia counties, have destroyed a mobile home and several outbuildings and camp structures, the Florida Department of Agriculture and Consumer Services said.

Olympic rings unveiling in London - London's Olympic Organizing Committee is set to unveil the first set of Olympic rings on city landmarks Thursday. The rings at St Pancras International Station will measure 70 by 30 feet. As London counts down to the 2012 Summer Games, rings will be displayed at Tower Bridge and the London Eye, and by light projections on the Houses of Parliament and the National Gallery, among other spots.

The amount of carbon emitted from severe wildfires that tore across many parts of the Northern Hemisphere this summŌĆtwitter.com/i/web/status/1ŌĆ”04
CNNweather

10:48 am ET September 21, 2021 RETWEET
Prince Andrew was served with legal papers in a civil sexual assault case against him when his US-based lawyer wasŌĆtwitter.com/i/web/status/1ŌĆ”sW
cnni

10:35 am ET September 21, 2021 RETWEET
Roger Federer said Novak Djokovic had a "truly exceptional" year, even as the world No. 1 fell short of winning a cŌĆtwitter.com/i/web/status/1ŌĆ”cZ
cnni

10:20 am ET September 21, 2021 RETWEET
US President Biden is currently delivering his first speech to the United Nations General Assembly since taking offŌĆtwitter.com/i/web/status/1ŌĆ”ZU
cnni