More than 40,000 people in Florida who received their first dose of Covid-19 vaccine are overdue for their second d‚Ätwitter.com/i/web/status/1‚Ä¶Ql

There have been more than 24 million Covid-19 cases in the US, data from Johns Hopkins University shows. It took th‚Ätwitter.com/i/web/status/1‚Ä¶vH

A small fire several blocks from the US Capitol prompted a lockdown, a reflection of the heightened state of alarm‚Ätwitter.com/i/web/status/1‚Ä¶Mo 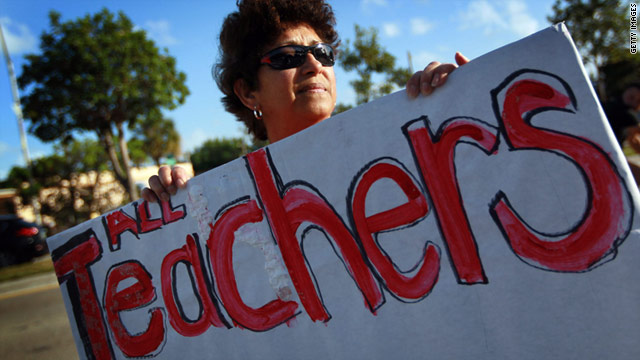 Podcast: Are teachers getting a bad rap?

From Wisconsin to New Jersey, many public school teachers feel they are too often criticized as lazy and overpaid.

So is there, as some suggest, a prolonged political attack on teachers?

Diane Ravitch told CNN that teachers, and the unions they belong to, are convenient political scapegoats.

‚ÄúUnions do more than reinforce bad teaching methods, they make it the standard,‚Äù Perry said. ‚ÄúYou don't even have to be an average teacher, you just have to be a satisfactory teacher. That is disgusting!‚Äù

As we researched this CNN Radio podcast we found the public is discussing the roles of teachers, unions and money much more today than just a decade ago.

We invite you to listen to the podcast, and comment below with what you think.

2:00 pm ET January 18, 2021 RETWEET
We are only a few weeks into 2021 but Indonesia has already experienced a series of disasters; all while reporting‚Ätwitter.com/i/web/status/1‚Ä¶B0
cnni

1:30 pm ET January 18, 2021 RETWEET
This giant blimp depicting Trump as a diaper-clad baby followed the outgoing US President on his visits to London a‚Ätwitter.com/i/web/status/1‚Ä¶xw
cnni