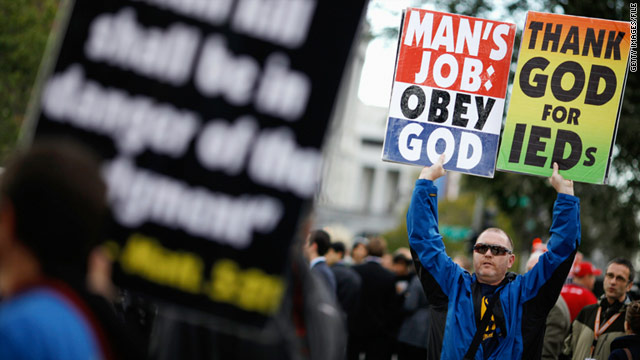 Fallen Marine's father says funeral pickets will draw gunfire: A day after the U.S. Supreme Court affirmed Westboro Baptist Church's right to protest at military funerals, the fallen Marine's father who unsuccessfully sued the controversial Kansas congregation warned that the church's protests will eventually spark violence.Â "They (the Westboro protesters) are going to go to the wrong funeral and the guns are going to go off,"Â Albert Snyder told CNN Thursday.

Sexuality and scripture: A scholar who has written books and articles on the Bible and homosexuality offers a rebuttal to aÂ recent CNN Belief Blog post onÂ the Bibleâ€™s surprisingly mixed messages on sexuality, saying that the Good Book is remarkably consistent on the issue.

Wisconsin governor threatens layoffs: Republican Scott Walker on Thursday warned 14 absent lawmakers trying to stall his controversial budget bill to return to the State Capitol immediately to vote on the measure, or layoff notices will be sent to 1,500 public employees before the weekend.

Ex-FBI agent may be alive in Asia: Evidence is growing that a retired FBI agent who disappeared in Iran four years ago is alive and being held in Asia, Secretary of State Hillary Clinton said Thursday.Â Robert Levinson disappeared during a business trip in March 2007.

A white iPhone: When? Where? How is it that a company that's been making electronics in white for at least a decade can't produce an iPhone 4 in that color? Another way to put it is: Is there an app for that?