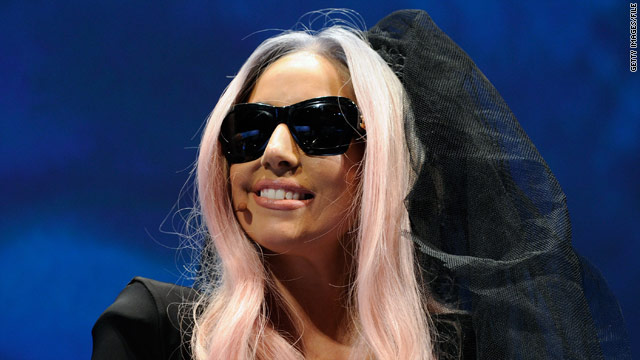 Lady Gaga may be one of the world's biggest stars right now, but a little girl stole her thunder, and her heart, Thursday night.
March 4th, 2011
11:37 AM ET

A 10-year-old girl who became a YouTube sensation by singing a Lady Gaga song joined her idol onstage Thursday night - and stole the show.

Maria Aragon of Winnipeg, Canada, walked onstage to wild cheers from the concert audience at Toronto's Air Canada Centre. Gaga picked her up in a hug and spun her around in the air.

Maria, wearing shiny black tights, a pink top and a tiny leather jacket, then sat on Gaga's lap on the piano bench and poised her fingers over the keyboard.

"I'm really excited that Maria is here today, because Maria represents what this song is all about," Gaga said, according to CNN affiliate CBC. "It's all about the next generation and the future, and no more divisiveness."

Maria began to play "Born This Way," the Gaga song she sang on the video that has drawn 17.7 million views in 15 days on YouTube. Gaga worked the pedals. The crowd went insane.

At the end of the song, the little girl thanked the crowd, Lady Gaga and her family and friends.

"I am a 10-year-old girl from Winnipeg, and I came her to sing to you guys, and I hope you enjoyed it," she said.

Gaga was tearful as Maria left the stage.

Maria later returned to the stage for an impromptu dance during the concert's post-midnight encore, CBC reported.

Friday morning, Gaga tweeted: "Myself +10 year Old Lady Maria of Winnipeg. She signed my t-shirt, she ate my heart, just like you."

It all started two weeks ago, when Gaga spotted the video and went on Twitter to tell her 8.5 million followers: "Can't stop crying watching this. This is why I make music. She is the future."

Since then, Maria has appeared on "Good Morning America" and "The Ellen DeGeneres show," and her video was posted on Perezhilton.com.

“I’m getting kind of tired, but this is for people and people’s entertainment,” Maria told the Toronto Star, which reported that her school chums have been asking for her autograph.

“I have a signature, actually. I’ve been practicing it for quite a while, because I do art, too. I didn’t know that I would have to sign it for other people, like my supporters,” she said.