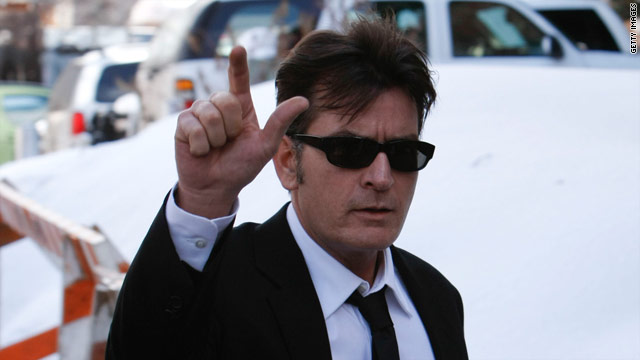 The Bakersfield, California, Condors of the East Coast Hockey League (East Coast?!) are offering these specials for their March 12 game against the Idaho Steelheads, straight from their website:

- Wear a fedora, or dress like any Charlie Sheen movie character and receive admission for two and a half bucks ($2.50).

- 2-for-1 Tiger Blood Icees and snow cones for the kids.

- The first 1,000 males will receive a Charlie Sheen face on a stick mask.

- Bring $2 million (reportedly as much as Charlie doesn't earn with each canceled episode) and you can own the Condors!

- Charlie's dubbed "Goddesses" (Natalie Kenly and Rachel Oberlin) have been named as honorary captains for the game. We're guessing the Steelheads won't mind if they get to hang out on the bench.

- A rock band from Mars will play in front of the arena on the plaza before the game.

- Before this game, the Condors aren't going to practice, attempting to channel Sheen's no-rehearsal-required spirit.

The team would love it if Sheen were to participate, Condors President Matthew Riley said on the team's website.

"We would invite him come up to the game and participate in a ceremonial puck drop and just have fun for the night with our fans. We'll even give him the ticket special for dressing up like himself," Riley said, according to the site.

"And oh yeah," he added. "To stick with the Charlie Sheen theme, we plan on 'winning' the game."

2:01 pm ET September 26, 2021 RETWEET
The planet is careening toward warming of 2.7 degrees Celsius above pre-industrial levels -- far above what scientiâ€twitter.com/i/web/status/1â€¦Nb
cnni

1:01 pm ET September 26, 2021 RETWEET
The center-left SPD party is ahead in exit polls as voting ends in Germany's election but the final result remainsâ€twitter.com/i/web/status/1â€¦4f
cnni