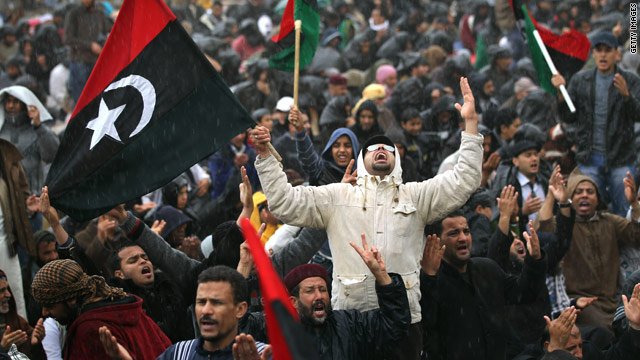 Anti-government protesters pray Friday in Benghazi, Libya, during a call to arms to join the fight against the government forces of President Muammar Gaddafi.
March 4th, 2011
10:51 PM ET

[LIBYA 9:06 p.m. ET, 4:06 a.m. local] Egypt's new prime minister, Essam Sharaf, appeared before thousands of protesters at Cairo's Tahrir Square on Friday, telling them he is "of the people" and would resign if he failed to meet their demands. Sharaf, Egypt's former transportation minister, was sworn in Friday after the resignation of Ahmed Shafik, the last prime minister appointed by Hosni Mubarak.

[LIBYA 6:00 p.m. ET, 1:00 a.m. local] The United Nations said Friday it is studying Libya's request to install a more loyal diplomat as its ambassador. A letter from Libya's government asked that former Foreign Minister Ali Abdussalam Treki be approved as its envoy. Treki, who recently served as the president of the U.N. General Assembly, would replace Mohamed Shalgham as ambassador in New York.

Battalions of forces loyal to Moammar Gadhafi attacked protesters with mortars and machine guns as they were demonstrating in the city's Martyrs Square, eyewitnesses said. The troops also assaulted an ambulance and killed people who fell wounded.

"Civilians were killed but we can not say how many. We buried nine people so far," the witness said. "The attack was indescribable. Direct gunfire was opened on people."

[SAUDI ARABIA, 12:04 p.m. ET, 8:04 p.m. local] A second protest unfolded in Riyadh after Friday prayer, according to two Saudi activists who requested they not be identified because of concerns for their safety.

As many as 40 anti-government demonstrators gathered outside Al-Rajhi Mosque for a short protest. At least one man involved in organizing the protest was arrested, the activists said.

[LIBYA, 11:02 a.m. ET, 6:02 p.m. local] At least 15 people have been killed and 200 wounded in the Libyan city of Zawiya, according to a doctor, who said "there is a river of blood" at the hospital where the injured are being treated.

Earlier, a report from Libyan State TV said that people in Zawiya, west of Tripoli, and "their public leadership have secured and took control over the city from the 'armed terrorist elements.'"

The doctor said wounded people started arriving at the hospital Friday morning, and most of the injuries are from gunshots.

Many of the injuries are critical, with wounds in the head and chest, the doctor said. The hospital is running out of medical supplies and "the situation is very bad," the doctor said.

An outspoken Shiite prayer leader who demonstrators say was arrested last Friday was a focal point of the "day of rage" protest, said Ibrahim Al-Mugaiteeb, president of the Human Rights First Society.

Sheikh Tawfeeq Al-Amer was arrested Friday after a sermon stating that Saudi Arabia should become a constitutional monarchy, Al-Mugaiteeb said.

[IRAQ, 6:10 a.m. ET, 2:10 p.m. local] Authorities imposed curfews and limited access to city centers across Iraq as thousands of protesters demanded economic progress and an end to corruption, police said. Demonstrators were reported to be gathering in Baghdad, Basra, Nineveh, Anbar and Salaheddin.

The developments follow weeks of demonstrations across the country by protesters angry about unemployment, poor basic services, corruption and a lack of freedom. At least 13 people died in protests on February 25.

[LIBYA, 4:43 a.m. ET, 11:43 a.m. local] The eastern Libyan town of al-Brega was calm early Friday, witnesses said, a day after forces loyal to Moammar Gadhafi launched airstrikes on the oil port in an effort to reclaim it from the opposition.

"I consulted with him. I asked him if he was willing to accept a commission of countries," Chavez said in remarks broadcast on state-run VTV Thursday night.

"And he told me, 'Look, Chavez, not only of countries; I hope the whole United Nations come here to see the reality of what's happening before they start condemning the Libyan government or the Libyan people, before they start thinking as they are now, and preparing to invade Libya."

In remarks broadcast on state-run VTV, Chavez did not specify whether such a commission would actually go to Libya.

The death toll surpasses 3,400 as Turkey and Syria reel from a devastating earthquake and aftershocks. Rescuers areātwitter.com/i/web/status/1ā¦W7
cnni

The death toll surpasses 3,400 as Turkey and Syria reel from a devastating earthquake and aftershocks. Rescuers areātwitter.com/i/web/status/1ā¦W7
cnni