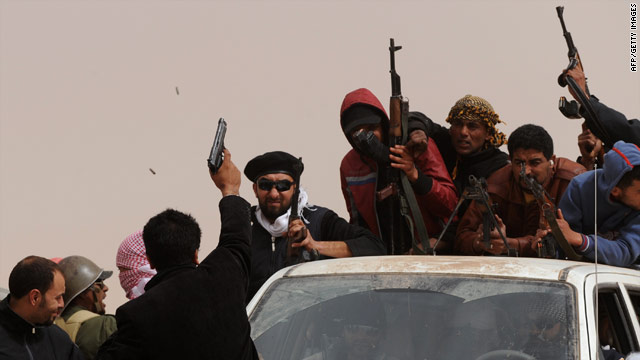 Libyan rebels fire into the air Friday on their way to fight loyalist forces in the city of Ras Lanuf.
March 4th, 2011
12:12 PM ET

A high school basketball player in Michigan collapsed and died Thursday night after making the winning shot in overtime to cap his team's 20-0 regular season.

An autopsy will be conducted to determine a cause of death for Fennville High School player Wes Leonard, 16, CNN affiliate WOOD-TV reported.

"He was a kind young man, an all-American kid everybody liked," Fennville Middle School principal Jodi Martin told WOOD. "He was an outstanding athlete who also strove academically. He had aspirations to go to college."

Leonard's mother, Jocelyn Leonard, is the vocal music director at the middle and high school.

Struggle for power in Libya goes on

Demonstrators and security forces clashed in the Libyan capital of Tripoli on Friday in the latest of several confrontations that have convulsed the country and triggered an exodus of refugees.

The clashes happened after weekly prayers in or close to the center of the city, two sources said, and there are indications that force has been used against demonstrators.

Anti-government protests occurred in the Tripoli neighborhood of Tajura, according to one report. People there wanted to march to Green Square in the city center.

Wisconsin Gov. Scott Walker is turning up the heat on 14 Democratic senators who fled the state to put off a vote on his drastic budget-cutting proposal, which sharply reduced public employees' collective bargaining rights.

Walker warned that he will take steps Friday to lay off 1,500 state workers if the proposal isn't voted on, and what remains of the Senate passed a resolution that would hold absentee Democratic lawmakers "in contempt of the Senate" should they not return to the Capitol by late afternoon.

In Indiana, where Democratic senators also have fled the state to stall similar legislation, the state House voted Thursday to fine the absent lawmakers $250 a day until they return.

And in Ohio, House committee hearings are slated to begin next week on a bill to curtail state workers' bargaining rights.

CNN writer-producer John Blake looks at the phenomenon of some whites' feeling like an oppressed minority as other ethnic groups grow in influence.

Whites are taking up the language and tactics of the civil rights movement as society evolves, Blake writes.

The notion that many white Americans feel anxious about their race is not new. Today, however, economic anxieties are feeding those racial fears, says Tim Wise, author of "White Like Me."

"I just want to say to all of our fans who dig our game, we appreciate your patience while we work through this," NFL Players Association executive director DeMaurice Smith said Thursday in Washington. "We're going to keep working. We want to play football."

Without a last-minute agreement or the extension of the deadline, the NFL Players Association had been expected to decertify on Thursday afternoon, clearing the way for an antitrust lawsuit if the owners lock out the players after the current contract expires.

@AnneMAnderson The field is my lifeâ€™s work. Donâ€™t mind filling in but my heart is in the streets.
sarasidnerCNN

6:13 pm ET April 14, 2021 RETWEET
@HerHandsMyHands This is the beat tweet to me today. Thank you I didnâ€™t know this and will do it in the future.
sarasidnerCNN

6:07 pm ET April 14, 2021 RETWEET
McDonald's is planning anti-harassment training across all 39,000 of its restaurants, the company says cnn.it/3wPkf8a
cnni