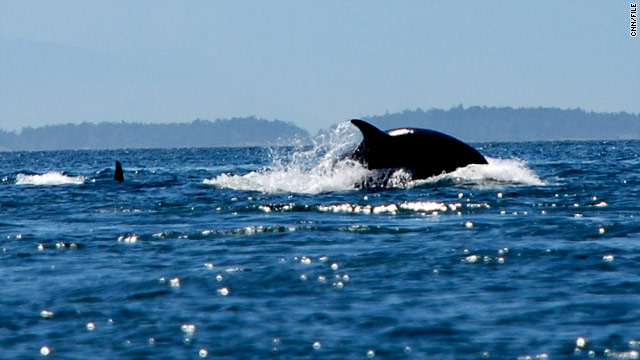 Killer whales do not have the respiratory filters that humans have.
March 4th, 2011
11:16 AM ET

Cara Lachmuth told the Victoria Times-Colonist that her two-year study of the effects of vehicle traffic patterns and atmospheric conditions on the local population of 87 orcas found the exhaust could harm the health of the whales.

"We're right at the threshold of where you would expect to see health effects," Lachmuth told the newspaper.

The nature of the ocean keeps the pollutants close to the surface of the water, she said, where the orcas breathe it into a respiratory system that doesn't have the filtering abilities of a human system, such as sinuses.

"It's because when you're out on the water, there's an inversion because the ocean is so cold, and in the summer the air is a lot warmer - the CO is sticking right at that interface, and it's not moving vertically at all," Lachmuth is quoted as saying.

Lachmuth said the whales are harmed by pollutant levels as low as 39% of that which would harm humans, the report said.

"For a one-hour exposure to average-case whale-watching conditions, we calculated the southern resident killer whales receive doses of carbon monoxide that are at the threshold of adverse health effects," the Times-Colonist quotes Lachmuth's study as saying.

The animals may be exposed as much as 12 hours a day during peak season, according to the report. And because the whales must hold their breath for extended periods as they dive below the surface, the harmful effects of exhaust may be made worse.

Lachmuth's study was published in the Marine Pollution Bulletin.

Americans view inflation, which is near 40-year highs, as the top problem facing the country today by a very wide mâ€twitter.com/i/web/status/1â€¦Rh
cnni

10:15 am ET May 22, 2022 RETWEET
US leadership around the world and at home is at a crossroads | Opinion by Jane Greenway Carr cnn.it/3G8Cnis
cnni