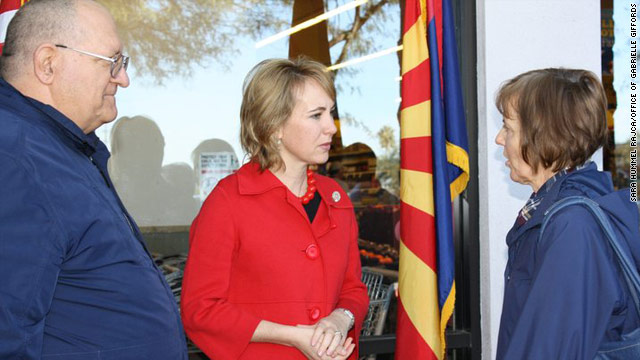 Rep. Gabrielle Giffords of Arizona speaks with Jim and Doris Tucker in Tucson on the morning of January 8.
March 4th, 2011
09:02 PM ET

Photo of Giffords on day of shooting released

Rep. Gabrielle Giffords' office Friday released a picture of her taken the morning of the shooting.

The congresswoman is seen standing in front of the grocery store, talking to constituents identified by her office as Jim and Doris Tucker.

Jim Tucker was shot twice, once in his calf and once in his collarbone, according to CNN affiliate KOLD. His wife escaped unharmed.

"I've wondered since the very beginning why wasn't I shot? But I just take it as a miracle from God that I wasn't, for some purpose," Doris Tucker has told the network.

She is undergoing rehabilitation at a medical facility in Houston.

The accused gunman, Jared Lee Loughner, was indicted Friday on 49 counts including murder and attempted murder.

6:01 pm ET October 17, 2021 RETWEET
San Andres is one of Colombia's most popular beach destinations in the country. Meet the local entrepreneur and divâ€twitter.com/i/web/status/1â€¦3G
CNNweather