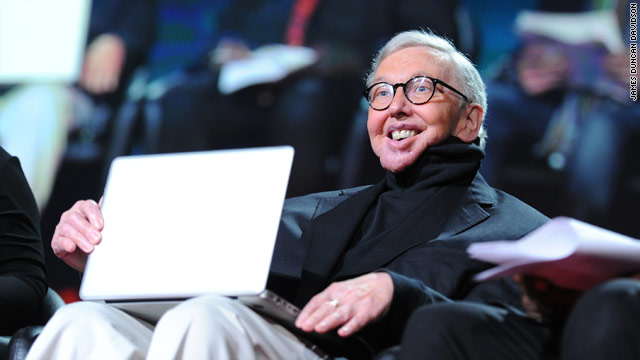 Ebert closes TED conference with emotional talk - and a laugh

In the end, Roger Ebert’s computer voice passed what he called the ultimate test. It got a laugh, which was no easy thing given the emotionally wrenching talk Ebert, his wife and two friends gave to close the TED conference Friday.

Ebert, the film and culture critic, lost the ability to speak and much of his lower jaw after operations for cancer four years ago.

Taking the stage at the conference in Long Beach, California, he wore a newly designed facial prosthesis. Ebert spoke through "Alex," a computer voice from his MacBook, and was accompanied by his wife, Chaz, and friends John Hunter and Dean Ornish. The four took turns giving the talk, as Ebert told the story of his illness, which turned a self-described "motor mouth" into a man who can't have a conventional conversation.

TED, which originally stood for the subjects of technology, entertainment and design, is a high-profile conference run by a nonprofit dedicated to "Ideas Worth Spreading." Its conference this year was titled, "The Rediscovery of Wonder."

"When you see me today, I look like the Phantom of the Opera," Ebert said, as Chaz immediately broke in to say, "No, you don’t!" She had to pause in the midst of the speech to regain composure.

"It is human nature to look away from illness," Ebert added, explaining that making friends for him is now much easier online, where his blog and Twitter feed draw wide readership. "I become uncomfortable when separated from my laptop."

Ebert began by playing a clip from the film "2001: A Space Odyssey," in which the eerie voice of the computer HAL 9000 says repeatedly, "My mind is going." The critic likened some of his computer voices to HAL, but pointed out there has been immense progress in technology used to simulate voices. A company in Scotland was able to create a computer voice that sounds like Ebert before he lost his ability to speak. The voice was generated through processing many hours of tapes of Ebert talking.

Still, the voice he put to the test was the impersonal "Alex."

"The ultimate test of a computer voice is whether it can tell a joke like Henny Youngman," Ebert said.

He told the audience, some in a somber state, a story that changed their mood:

"A guy goes to a psychiatrist, who tells him, 'You’re crazy.'