The gunman in the Texas elementary school shooting wasnãt confronted before entering the school, an official says.twitter.com/i/web/status/1ãÎRtLB

The Supreme Court will allow the Biden administration to continue to use a metric that estimates the real-world cosãtwitter.com/i/web/status/1ãÎrb

Former President Trump and his children Ivanka and Donald Jr. must sit for depositions in NY attorney generalãs civtwitter.com/i/web/status/1ãÎdJHg

RT @CNN: President Biden says he'll travel to Texas in the coming days to meet the families of the 19 children and two teachers killed in tãÎ 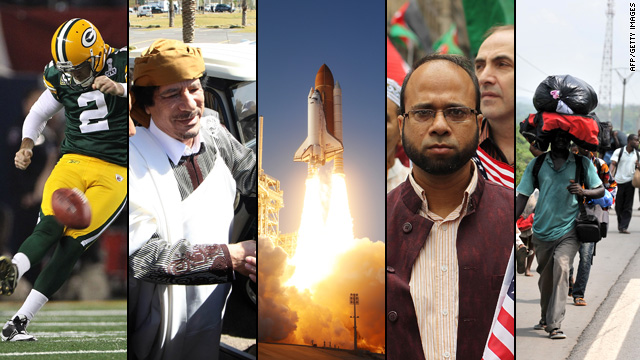 As an uprising in Libya approaches the start of its fourth week, the stage appears set for more bloody battles as pro-government and opposition forces grapple for key cities along the Mediterranean Sea. Here is a look at this and some of the other stories CNN plans to follow this week:

Libyan government and opposition in battle for territory, minds

Sunday - a day of heavy fighting in some areas of Libya - witnessed a bizarre clash of claims from both sides, with the opposition saying it had repelled attacks from pro-government troopsô in places such as the keyô north-central Libyanô city of Misrata, where 42 were said to haveô been killedô in fighting onô Sunday, while a pro-government rally in Tripoli celebrated what participants said were government victories in the same cities.

Opposition forces, said to be bolstered by weapon cachesô previously under the Libyan government's control, are seeking the ouster of Libyan leader Moammarô Gadhafi after his nearly 42-year rule. It'sô the kind of revolution that was seen in neighboring Tunisia and Egypt, but unlike in those countries, the uprising has turned into warfare. Death toll estimates range from more than 1,000 to as many as 2,000, and the international community has been pondering strategies on how to end the violence and remove the Gadhafi regime. Meanwhile, aô council inô Libya's second-largest city, opposition-held Benghazi, says it is the country's sole legitimate representative and will stay in Benghazi until Tripoli is out of Gadhafi's grasp.

Libya is one of the countries in Africa and the Middle Eastô hit by unrest in the past couple ofô months. Read more details on the situations in the other nations.

The United Nations says it's planning to send 2,000 more troopsô to its peacekeeping mission in the Ivory Coast because of escalating violence stoked by a disputed presidential election. Last week, at least six women were fatally shot in Abidjan while protesting the refusal of the incumbent leader, Laurent Gbagbo, to step down. The United Nations says about 365 people have been killed since December in violence between supporters of Gbagboô and his challenger, Alassaneô Ouattara, whom theô U.N. says defeated Gbagbo in November's election. World leaders are concerned that the standoff will cause a civil war like one that ravagedô the country in 2002.

House panel to start hearings on radicalization of American Muslims

Aô U.S. House committee on Thursday is due to start a series of hearings on the radicalization of American Muslims, a topic that has alarmed many U.S.ô adherents of Islam. The House Homeland Security Committee's chairman, Republican Rep. Peter King of New York,ô says radicalization in a small minority of American Muslims poses a threat to the United States, and that the threat needs to be explored. The hearings haveô persuaded some U.S. Muslims to lobby Washington, trying to counter what they call a rising tide of Islamophobia.

While Tuesday will bring exuberant indulgence in New Orleans for Mardi Gras, temperance and sacrifice will be the motto in Florida and Ohio.ô Govs. Rick Scott and John Kasichô likely will try toô sober up the masses when they addressô their states'ô budget deficits during their state-of-the-stateô speeches Tuesday. Just how daunting aô budget task do theyô face compared to their 48 peers? Click here to see a chart listing states' projected 2012 budget deficits. The chart also lists the number of public employees who collectively bargain in those states, somethingô that's beenô in the crosshairs of many a GOP governor. Wisconsin Gov. Scott Walker has threatened to lay off some state workers if lawmakers don't pass a budget thatô ô wouldô limit collective bargaining for public employees.ô ô

U.S. President Barack Obama on Monday will welcome Australian Prime Minister Julia Gillardô to Washington for the first time since she was elected in June. Gillard is due to address a joint session of Congress, andô she and Obama willô discuss "sharedô political and economic interests in the Asia-Pacific region" and the countries' work together around the world, including in Afghanistan, according to a White House press release.

NFL,ô players' union get another week to avoid lockout

The National Football League and its players' union now have until midnight Friday to get a new labor deal and avoid a possible lockout. The currentô labor deal was to expire last week, but negotiators agreed toô extend collective bargaining negotiations. If theô new deadline holdsô and a new deal isn't struck, team ownersô could choose to lock out their playersô and the union could decertify, allowing the players to sue the league under antitrust laws.

Five potential candidates for the GOP presidential nomination will be in Iowa, the first caucus state for presidential primaries, for aô "presidential forum" held by the Iowa Faith and Freedom Coalition. Formerô Minnesota Gov. Tim Pawlenty, former U.S. House Speaker Newt Gingrich, former U.S. Sen. Rick Santorumô of Pennsylvania, former Louisiana Gov. Buddy Roemerô andô businessman Herman Cain will be at the event to make a 10-minute pitch on "their vision as the voters of Iowa begin the process of making their decisions," according to the coalition's website. Meanwhile, a senior adviser to Donald Trump, who also may be considering a run for the White House, also willô be inô Iowa on Monday to meet with Republican party officials, organizers and potential sources of campaign money.

Shuttle Discovery due to make last return from space

NASA's space shuttle Discovery is scheduled to make its final return from space on Wednesday. ô The shuttle, which is being retired with the rest of the shuttle fleet, is due to touch down at Florida's Kennedy Space Center. The nearly three-decade shuttle program is scheduled to end later this year.

Monday will see the launch of the CNN Freedom Project, whichô aims to shine a light on the horrors of modern-day slavery. Check CNN.comô forô stories amplifying the voices of the victims, highlighting successes and helping unravel the complicated tangle of criminal enterprises trading in human life.

3:21 pm ET May 26, 2022 RETWEET
Jeff Bridges has a message now that he's on the other side of Covid and his cancer is in remission: "Love is the deãtwitter.com/i/web/status/1ãÎTk
cnni

2:05 pm ET May 26, 2022 RETWEET
Ray Liotta, the actor known for his roles in "Field of Dreams" and the Martin Scorsese mob classic "Goodfellas," haãtwitter.com/i/web/status/1ãÎ6V
cnni

3:21 pm ET May 26, 2022 RETWEET
Jeff Bridges has a message now that he's on the other side of Covid and his cancer is in remission: "Love is the deãtwitter.com/i/web/status/1ãÎTk
cnni

2:05 pm ET May 26, 2022 RETWEET
Ray Liotta, the actor known for his roles in "Field of Dreams" and the Martin Scorsese mob classic "Goodfellas," haãtwitter.com/i/web/status/1ãÎ6V
cnni

4:11 pm ET May 26, 2022 RETWEET
The gunman in the Texas elementary school shooting wasnãt confronted before entering the school, an official says.twitter.com/i/web/status/1ãÎRtLB
cnnbrk

3:20 pm ET May 26, 2022 RETWEET
The Supreme Court will allow the Biden administration to continue to use a metric that estimates the real-world cosãtwitter.com/i/web/status/1ãÎrb
cnnbrk

2:31 pm ET May 26, 2022 RETWEET
Ray Liotta, who starred as Shoeless Joe Jackson in ãField of Dreamsã and Henry Hill in ãGoodfellas,ã has diedtwitter.com/i/web/status/1ãÎQervBHOy4P
cnnbrk