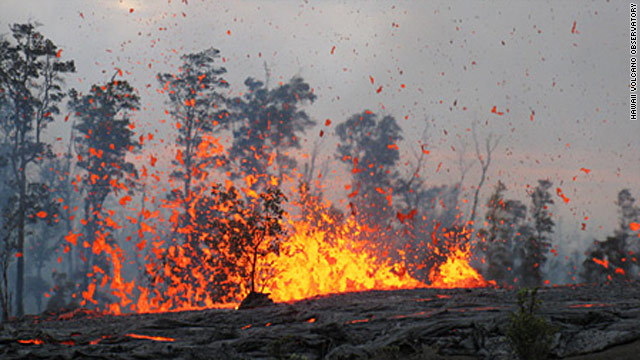 Lava from Hawaii's Kilauea Volcano was shooting as high as 80 feet in the air Sunday after the collapse of the floor of the volcano's Pu'u 'O'o crater a day earlier.

Hawaii Volcano Observatory scientists said the floor of the crater dropped 377 feet over almost three hours on Saturday┬Ā and a fissure developed between the Pu'u 'O'o and Napau craters on Kilauea.

The lava lake on Kilauea's summit has drop since the collapse, scientists said in a press release Sunday.

The volcano observatory was set up a webcam to provide updated still images of the erupting fissure and the Puu Oo crater.

Kilauea is the youngest volcano in Hawaii and perhaps the world's most active, according to the volcano observatory. The current activity is a continuation of an eruption that began in 1983.

Kilauea, the home of Hawaii's goddess of fire Pele, has erupted 34 times since 1952.

7:16 pm ET December 1, 2022 RETWEET
RT @tribelaw: This defeat for Trump is a triumph for the rule of law. DOJ has succeeded in convincing the unanimous Circuit Court that JuŌĆ”
susancandiotti

PSG chairman and CEO Nasser Al-Khelaifi said he believes media criticism of Qatar was down to the fact that many haŌĆtwitter.com/i/web/status/1ŌĆ”Gj
cnni

8:00 am ET December 3, 2022 RETWEET
The European Union has agreed to limit the price of Russian oil in an effort to hinder Putin's war on Ukraine. cnn.it/3FnjkSR
cnni

8:00 am ET December 3, 2022 RETWEET
Christian Pulisic is ŌĆ£cleared to playŌĆØ in the USA's World Cup match against the Netherlands on Saturcnn.it/3iAv6AjuS9a
cnni

7:30 am ET December 3, 2022 RETWEET
Tesla made the first deliveries of its Semi truck to customers Thursday evening, five years after the heavy-duty haŌĆtwitter.com/i/web/status/1ŌĆ”ND
cnni

7:00 am ET December 3, 2022 RETWEET
Health officials in the United Kingdom are advising parents and schools to watch for Strep A infections following tŌĆtwitter.com/i/web/status/1ŌĆ”UU
cnni