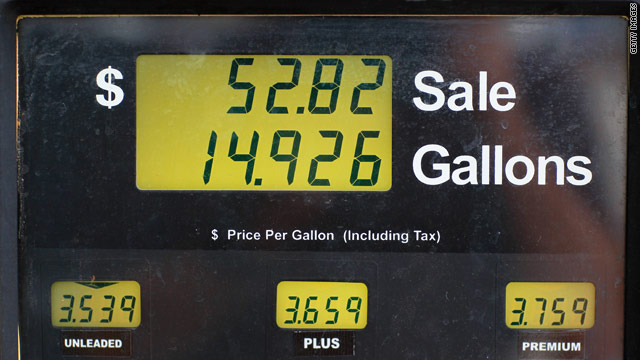 Gas prices may be jumping, but this particular situation is not a job for the U.S. Strategic Petroleum Reserve, CNNMoney's Paul R. La Monica reports.
March 7th, 2011
06:22 PM ET

Tapping U.S. oil reserves is a bad idea: There are growing calls to tap the Strategic Petroleum Reserve in the face of rising gas and oil prices. But prices are largely being driven by speculators.

Tech companies desperate for "rockstarninja engineers": A flood of startups has sparked a talent war over the industry's scarcest resource: Skilled engineers and developers.

Coke bottles made from plants?: That's just one of the ideas being pursued at Coca-Cola. The company has developed technology to make fully recyclable bottles using 30% plastic made from sugar cane.

The story behind the $6 million 1937 BMW: The 1937 BMW 328 BuegelfalteÂ raced in the Mille Miglia and was owned by one of Hitler's top aides during WWII.

Saturn's largest moon, Titan, is the only moon in our solar system that has a thick atmosphere. It's four times denâ€twitter.com/i/web/status/1â€¦Ss
cnni

2:01 am ET October 29, 2020 RETWEET
This futuristic Tokyo spaceport is designed to bring suborbital spaceflights to the masses. cnn.it/3muM4g8
cnni

1:01 am ET October 29, 2020 RETWEET
While social distancing is a new concept for most of us, researchers are finding it's actually standard practice foâ€twitter.com/i/web/status/1â€¦2M
cnni