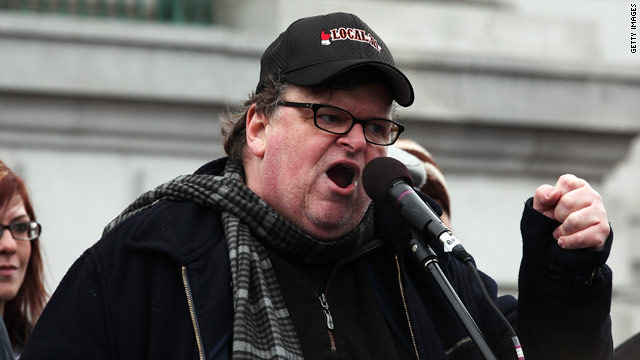 The filmmaker behind the Oscar-winning documentary "Bowling for Columbine" appeared before union activists in Wisconsin and praised them for "arousing a sleeping giant," the Wisconsin State Journal reported.┬ĀMoore addressed at least 30,000 protesters, urging them to continue their demonstrations against Gov. Scott Walker's budget proposals. "America is not broke," he told the crowd, according to the Madison newspaper. "The only thing that's broke is the moral compass of the rulers."

The billionaire Dallas Mavericks owner, who runs a television network called HDNet, is in talks with actor Charlie Sheen about a possible show, The Dallas Morning News reported. Cuban, who called Sheen "pretty cool," wouldn't elaborate except to say the partnership posed a "unique opportunity," according to the paper.┬ĀCuban also told the Morning News, "We always look for interesting programming featuring interesting people doing interesting things."

He is identified as the administrator of a website called Cryptome, which, long before WikiLeaks, posted ŌĆ£documents for publication that are prohibited by governments worldwide." On Sunday, the site posted a 17-minute video taken from a police helicopter of the World Trade Center after the September 11, 2001, attacks.

The Biden administration has authorized more than $2 billion in arms sales to Egypt despite ongoing concerns aboutŌĆtwitter.com/i/web/status/1ŌĆ”iE
cnni

3:09 pm ET January 26, 2022 RETWEET
A senior US official suggested Wednesday that the Winter Olympics beginning next week in China could affect RussianŌĆtwitter.com/i/web/status/1ŌĆ”Ow
cnni

2:51 pm ET January 26, 2022 RETWEET
Twitter has suspended a bot that automatically responded with the next day's solution when people posted their WordŌĆtwitter.com/i/web/status/1ŌĆ”Jp
cnni

2:41 pm ET January 26, 2022 RETWEET
It wasn't exactly "The Fast and the Furious" ŌĆö pretty much the opposite ŌĆö but the 1988 Oscar winning film "Rain Mtwitter.com/i/web/status/1ŌĆ”EQxBaq
cnni