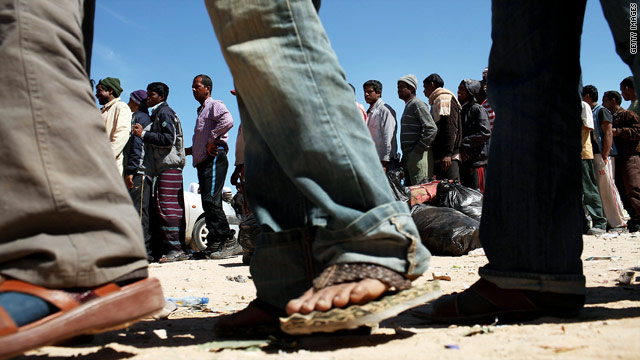 Libya - Supporters of Libyan leader Moammar Gadhafi continue to battle anti-Gadhafi forces throughout the country. The unrest has been going on for weeks and is affecting oil prices worldwide as gas prices have spiked in recent weeks. Check out CNN's reporting around Libya, city by city. On Monday, air strikes continued to target the opposition-controlled oil town of Ras Lanuf as Gadhafi supporters tried to take back the city. CNN correspondent Ben Wedeman was just outside Ras Lanuf and heard someone say, "We'll capture [Gadhafi], put him on top of this car and drive all around Libya. Every Libyan will get one shot [at the leader]." Wedeman was one of the first journalists inside the country when the protests began, and he reports on who will be fighting in the conflict.

CNN's Nic Robertson reports that fighting is getting closer to the Libyan capital of Tripoli. Also Monday, as several families in Ras Lanuf fled for cover, Gadhafi's forces made headway in the city of Bin Jawad, which was hotly fought over during the weekend. Anti-government protesters have been rallying for weeks in the hopes that Gadhafi, who has ruled the country for 42 years, will leave power. Similar uprisings occurred earlier this year in Egypt and Tunisia, and other protests have raged throughout the Middle East and North Africa as demonstrators have called for changes in leadership and power structures in their countries. What's next in Libya? Do you have a story that relates to the country? Are you there? Send an iReport.

Hearings on radical Islam - Over the weekend, protesters demonstrated in New York ahead of congressional hearings on radical Islam scheduled for this week. Other critics of the hearings include music mogul Russell Simmons. The topic is sure to remain hot all week as CNN covers every angle of the debate. Rep. Peter King, chairman of the House Homeland Security Committee, called the for hearings on what is being called "the radicalization of American Muslims." Critics say the hearings would unfairly target Islam and could stoke fear and fuel violence against  Muslims. King and Rep. Keith Ellison, who is the first Muslim elected to Congress, talked about the reasons for the hearings on CNN on Sunday with Candy Crowley.

Freedom Project begins - CNN has launched its Freedom Project, a first-of-its-kind global effort to draw attention to and end all forms of slavery around the world, including in the United States. See  what the project is about, and read the first story in the series. It's about a group of boys from Zambia who were trafficked into the U.S. to make money for a faith-based organization. The boys saw little profit for their work and were not given the education or school in their home country that they were promised.