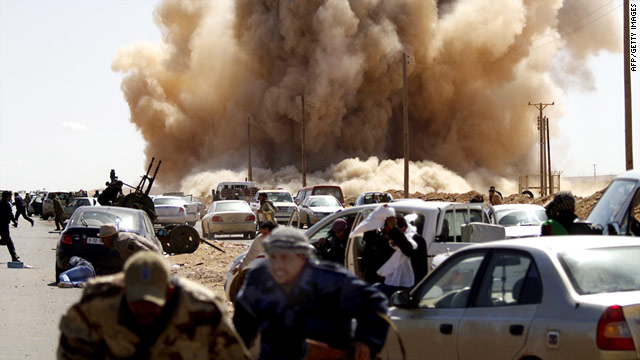 France, Britain, and the United States are drafting a resolution that would create a no-fly zone over Libya.
March 7th, 2011
12:09 PM ET

NATO has launched around-the-clock surveillance flights of Libya as it considers various options for dealing with escalating violence in the war-torn country, America's ambassador to the organization told reporters Monday.

France, Britain, and the United States are working on a draft text that includes language on a no-fly zone over Libya, diplomatic sources at the United Nations said Monday.

The possible resolution will deal with triggers rather than timelines, one diplomat said.  If gross violations of human rights are committed, the diplomat added, the elements could be quickly turned into a resolution.

The text would be subject to a vote by the 15 members of the Security Council.  A Security Council diplomat said they were looking to submit the ideas to the council soon.

Any kind of military intervention in Libya could face sharp criticism from Russia and China who rarely approve of such measures.