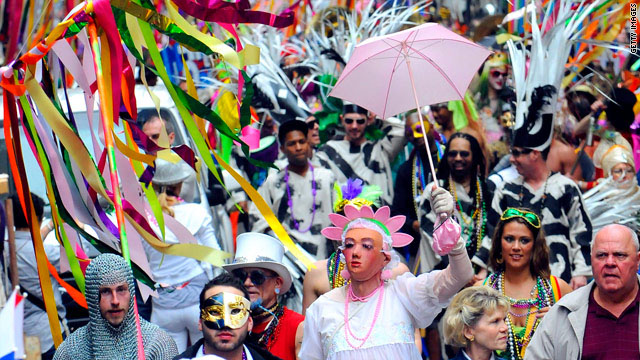 Gray skies and a little rain didn't dampen the mood of Fat Tuesday revelry in New Orleans, home to the biggest Mardi Gras celebration in the nation.

Known as a day of excess before the start of the penitential Lenten season - when observant Christians typically fast or give up something in a show of faith - New Orleans' Mardi Gras reached raucous heights this year, owing to its overlap with many colleges' spring breaks and the approach of the anniversary of the BP oil spill - the object of ridicule for many maskers.

Sylvia Beyer, 57, of New Orleans led a group of five women in grass skirts and hats with the BP logo, CNN affiliate WSDU reported. On their backs were the slogans, Broken Promises, Brazen Polluters and Bloody Pathetic as they passed out voodoo dolls with a photo of former BP CEO Tony Hayward pasted to each.

Downriver in Grand Isle, Louisiana, the first populated piece of U.S. territory to see oil make land, residents on Sunday took a day off from worrying about the effects of the spill to enjoy a parade, complete with purple, green and gold bead necklaces and fleur-de-lis clappers.

Far from the Gulf shores, Rio de Janeiro marked the end of its four-day carnival on Tuesday with its signature parade, complete with samba, King Kong, an oversized Jesus statue and supermodel Gisele Bundchen. Talk about excess!