Forty-three hospital ICUs in 21 Florida counties have hit capacity and show zero beds available, according to the lâ€twitter.com/i/web/status/1â€¦a0

President Trump is expected to travel to Doral, Florida, a coronavirus hotspot, later this week. He'll visit US Souâ€twitter.com/i/web/status/1â€¦UL

RT @CNNBusiness: It is unclear when TikTok â€” which is owned by Beijing-based startup ByteDance â€” will exit Hong Kong, and what that will meâ€¦

Georgia Gov. Brian Kemp declares a state of emergency and calls up the National Guard after what he said were "weekâ€twitter.com/i/web/status/1â€¦mD

Chuck Grassley, who at 86 is the Senate's oldest Republican, says he will skip the Republican National Convention bâ€twitter.com/i/web/status/1â€¦ZA

Atlanta Mayor Keisha Lance Bottoms says she has tested positive for Covid-19. She says she has no symptoms. Followâ€twitter.com/i/web/status/1â€¦wL

International students in the US may have to leave the country if their universities switch to online-only courses,â€twitter.com/i/web/status/1â€¦Mm 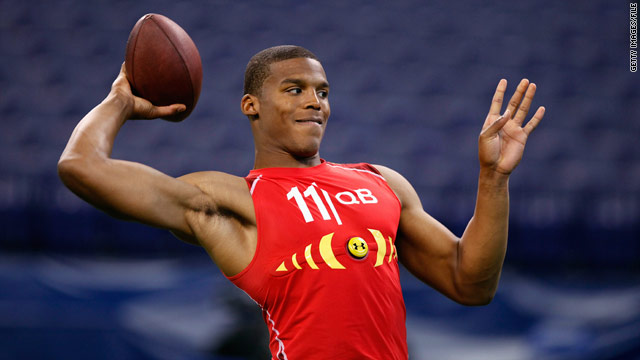 SI.com: At least we have the draft

While the NFL and its players union are still at lengthy odds - most recently, over the transparency of financial information - next month's draft will still go on as scheduled and promises to improve several teams whether there is a season or not.

College pro days are being scouted and critiqued across the country while Roger Goodell, DeMaurice Smith and other NFL types are huddled in conference rooms trying to hash out a collective bargaining agreement so there can, in fact, be football this fall.

With the NFL Scouting Combine in our rear-view mirror as well as a host of workouts this past week, SI.comâ€™s Don Banks delivers the third installment of his 2011 NFL Mock Draft. In it, Banks projects two quarterbacks are going in the top three, and has a QB going No. 1 overall that isnâ€™t named Cam Newton, college footballâ€™s reigning Heisman Trophy winner. Banks also has a prized prospect slipping down in the draft after a mediocre showing earlier this week.

For Banks' draft predictions on all 32 teams, click here. To follow the NFL's ongoing labor problems, check back with SI.com.

Rutgers vs. No. 17 St. John's (2 p.m., ESPN): The Red Storm has a home-court advantage when they take on Rutgers in the first round of the Big East Tournament at Madison Square Garden. St. John's has not won more than one game in the conference tourney since winning it all in 2000.

New York Knicks at Memphis Grizzlies (8 p.m., NBATV): Carmelo Anthony and the Knicks look to win their third straight when they take on the red-hot Grizzlies, who have won 9 of 12 and recently knocked off the Thunder and the Mavericks.

5 â€“ Losses in a row for LeBron James and the Miami Heat, who fell 105-96 at home last night to the Portland Trailblazers, winners of seven straight road games.

8 â€“ Wins in a row for the two-time defending champion Los Angeles Lakers, who travel to Miami on Thursday to take on the struggling Heat.

$305,000 â€“ AmountÂ that authorities allege wasÂ stolen from Angels first baseman Kendry Morales by a South Florida sports agent over the course of two years. The agent, Rodney Fernandez, turned himself in Monday on a grand theft charge.

The NFL's Kansas City Chiefs have signed their quarterback Patrick Mahomes to a 10-year contract extension that hisâ€twitter.com/i/web/status/1â€¦LL
cnni

9:43 am ET July 7, 2020 RETWEET
Strict lockdown measures are to be reimposed in Australia's second largest city, as authorities scramble to preventâ€twitter.com/i/web/status/1â€¦kY
cnni

9:31 am ET July 7, 2020 RETWEET
Siberia is one of the coldest areas on Earth, but is currently grappling with intense fires as well as record highâ€twitter.com/i/web/status/1â€¦IJ
CNNweather

9:22 am ET July 7, 2020 RETWEET
Here's everything you need to know about the coronavirus pandemic today: cnn.it/2DjKPz9 ðŸ“© Sign up to getwitter.com/i/web/status/1â€¦LU09P
cnni