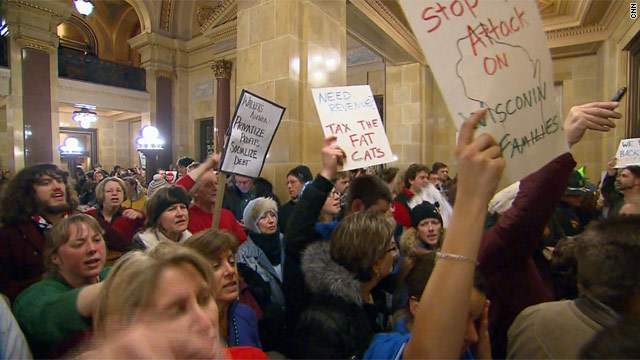 The vote drew howls of outrage from outside the chamber, where pro-union demonstrators chanted "Shame" and "You lied to Wisconsin" as the bill passed.
March 9th, 2011
10:59 PM ET

Are you there? Share photos and video of the protests, or your views on the issue with the CNN iReport community.

"This is a date that will live in infamy."

President Franklin D. Roosevelt's oft-quoted assessment of the bombing of Pearl Harbor in 1941 surfaced on Twitter Wednesday night, as reaction to the Wisconsin Senate's vote to pass proposed restrictions on collective bargaining for public employees began to flood the social media site.

Accompanied by the hashtag, #AshWednesdayMassacre, the sentiment captured the anger and disbelief of many around the Wisconsin capitol - and in the Twitterverse - who feel that the Republicans manipulated the vote by stripping the budget bill of all things budget-related to get around the need for a quorum in the absence of 14 Democratic senators. The move, some believe, lays bare their true motive from the start: to gut the unions, pure and simple.

Not everyone's upset with the vote, which would bar public workers other than police and firefighters from bargaining collectively for anything other than wages, in what Walker and GOP lawmakers say will help close a $137 million budget shortfall.

"wisconsin gop reminds unions that collective bargaining is a privilege, not a right," brooksbayne tweeted.

"Nothing says democracy like voting with no notice, preventing the public from observing, and locking the doors of the capitol" - mirerony.

"Still waiting for @BarackObama to stand the picket line as promised. This is class warfare of the worst kind." - ericming5

"This is EXACTLY why we need collective bargaining. Would you trust these legislators to determine your working conditions?" - shankerblog

"Repubs freaked out abt czars, but claim rt 2 dissolve towns. wht planet did I wake up on? Planet Plutocrat?" - XicanaMama

"Furious beyond belief. What happens now? This can not be abided & will not be forgotten. It has only just begun." - HarryWaisbren

"Has anyone else noticed that the state of #Wisconsin looks like a clenched fist?" - Red_Ben89

"Apparently Gov. Walker is giving up democracy for Lent." - blissfulfun

"Since there don't appear to be any rules/laws in WI government now, let's skip the 1 year rule and recall Walker's ass right now." - AnnieRauh

"Hey, things happen. RT @TeresaKopec: I guess the Kochs got their money's worth. And the middle class just got kicked in the teeth." - umarsattar

The OPEC+ decision to dramatically cut its oil output targets has left the White House grappling with a complex â€“ atwitter.com/i/web/status/1â€¦aQAr
cnni

The OPEC+ decision to dramatically cut its oil output targets has left the White House grappling with a complex â€“ atwitter.com/i/web/status/1â€¦aQAr
cnni