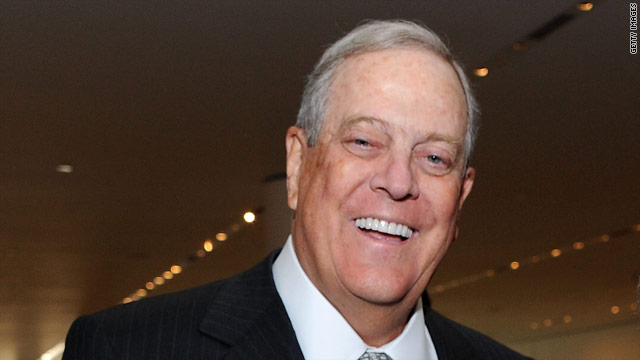 If you've been following the reaction to the controversy over the Wisconsin bill to restrict collective bargaining rights, you're probably aware of the sentiments permeating comment boxes and social media. If not, let's bring you up to speed:

- Solidarity with union workers: "I stand with the SLOBS who teach my kids, empty my trash, protect my neighborhood, put out my fires, fix my roads." - linc0lnpark

- Support for the measure: "I live in Wisconsin, I voted for Governor Walker, and I support him and what the Senate did last night 100%. All of the Democrats that fled the state need to be recalled. All of the Union supporters that have infiltrated my state from other places, can pack their crap up and leave – NOW. Oh, and fire all the teachers that called in 'sick' too." - kat101160

There's also a deeper, equally pervasive thread making the rounds accompanied by the hashtag #Koch. Such comments are¬Ýfull of insinuation, speculation, rumor and innuendo over Gov. Scott Walker's connection to Koch Industries, a private, Kansas-based company with diverse holdings in nearly 60 countries, including a presence in Wisconsin.

VIDEO: The two most influential names in politics you've never heard of

The company also has a long history of supporting free-market principles through its political action committee, KOCHPAC, which contributed $43,000 to Walker‚Äôs 2010 gubernatorial campaign.

Tweets and comments such as, "Welcome to #FitzWalkerStan we used to be called Wisconsin. We are a division of Koch Industries," or "Walker is deaf to the voice of people. He is a puppet of Koch brothers" speak to speculation that Walker is in the pocket of Koch Industries.

The Koch name first came to be associated with the budget repair bill when an online news editor posed as David H. Koch, executive vice president of Koch Industries, and duped Walker into taking a prank call.

Ian Murphy, editor of the news website "Buffalo Beast," recorded the 20-minute conversation with the governor. In it, Walker discusses the idea of bringing 14 Democratic state senators back to the assembly to "talk, not negotiate," allowing them to recess, and then having the 19 Republican senators declare a quorum.

Murphy, posing as Koch, suggested "planting some troublemakers" among the people protesting the measure in Madison. "We thought about that," Walker allegedly replied.

(Walker confirmed that he had been duped by Murphy, saying he takes phone calls all the time: "The things I said are the things I've said publicly all along. The fact of the matter is people have brought up all sorts of different options.")

Charles Koch, the company's chairman and CEO and David Koch's brother, has made no secret of his support for Walker's efforts to cut government spending or shrink the state's budget shortfall.

"Years of tremendous overspending by federal, state and local governments have brought us face-to-face with an economic crisis. Federal spending will total at least $3.8 trillion this year‚Äîdouble what it was 10 years ago. And unlike in 2001, when there was a small federal surplus, this year's projected budget deficit is more than $1.6 trillion," Koch said in a March 1 column in the Wall Street Journal.

"For many years, I, my family and our company have contributed to a variety of intellectual and political causes working to solve these problems. Because of our activism, we've been vilified by various groups. Despite this criticism, we're determined to keep contributing and standing up for those politicians, like Wisconsin Gov. Scott Walker, who are taking these challenges seriously."

He stops short of pledging support in the column for the budget repair bill proposed last month by Walker and the GOP lawmakers in his state.

In a statement on its site, the company denies involvement in lobbying for the bill and says it takes no position on the state‚Äôs debate over public sector unions.

"Koch has always and will continue to support market-based policies that advance economic freedom, and we support candidates who do the same. This was the basis for Koch‚Äôs support of Gov. Walker's candidacy."

Regarding unions in general, the company says it support voluntary associations and employees' rights to bargain collectively.

"We think the best workplace relationships are fostered when the employer works directly with its employees. It is a mischaracterization of our principles to say this means we want to dismantle all unions."

Delta Air Lines has offered a 34% cumulative pay increase to its pilots over three years in a new contract, demonst‚Ätwitter.com/i/web/status/1‚Ä¶ge
cnni

12:30 pm ET December 5, 2022 RETWEET
@javimorgado @CNN We were all honored to work with you. You somehow maintained the best attitude, we‚Äôre the most entwitter.com/i/web/status/1‚Ä¶j1r4
sarasidnerCNN

Delta Air Lines has offered a 34% cumulative pay increase to its pilots over three years in a new contract, demonst‚Ätwitter.com/i/web/status/1‚Ä¶ge
cnni

12:30 pm ET December 5, 2022 RETWEET
@javimorgado @CNN We were all honored to work with you. You somehow maintained the best attitude, we‚Äôre the most entwitter.com/i/web/status/1‚Ä¶j1r4
sarasidnerCNN