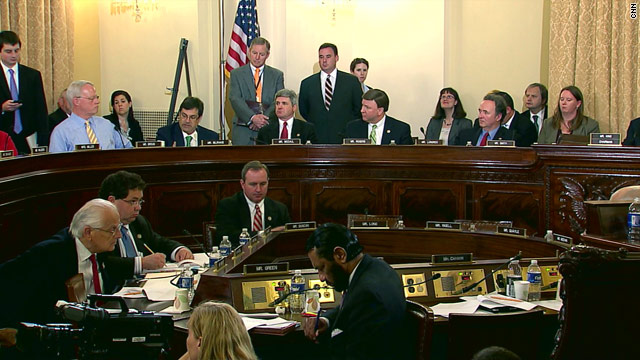 Hearings on the radicalization of Muslim Americans is being held Monday in a small room at the capital.
March 10th, 2011
02:25 PM ET

At 9:30 a.m. ET Thursday, the House Homeland Security Committee opened the first in a series of hearings looking into alleged radicalization in the Muslim community in the United States.Â Below, you'll find a running account ofÂ some of the highlights ofÂ Thursday's hearing, which endedÂ shortly before 2 p.m.Â

The hearings, titled "The Extent of Radicalization in the American Muslim Community and That Community's Response," were called by the committee's chairman, Rep. Peter King, a nine-term Republican from Long Island, New York. On Monday, CNN reported that his personal security had been beefed up because of controversy over the impending hearings. Some have said they fear the hearings will stoke bigotry. Others say they will foster fear of Muslims in general, and suggest that anyone who practices Islam could be radicalized. One of those critics is Minnesota Democratic Rep. Keith Ellison, the sole Muslim member of Congress, who will testify. "This hearing actually could set us back because it reinforces the al Qaeda narrative, which is that America is at war with Islam. ... This hearing seems kind of like a targeted persecution," Ellison said.

King has responded by saying, "To back down (from holding the hearings) would be a craven surrender to political correctness and an abdication of what I believe to be the main responsibility of this committee - to protect America from a terrorist attack."

CNN's Peter Bergen examined cases since 9/11 of so-call homegrown terrorist threats. Stephen Prothero, a Boston University religion scholar, wrote that the hearings could promote the idea that America is really at war with Islam and would actually help terrorists appeal and recruit more fighters. Check out Prothero's thoughts on CNN.com's Belief Blog.

There are no federal investigators testifying in the hearings. The only law enforcement witness is Los Angeles County Sheriff Lee Baca. Ellison faulted King for arranging anecdotal testimony rather than inviting more law-enforcement authorities or experts in terrorism, including FBI or CIA agents.

9:45 a.m. ET: King opened the hearings with the statement, "Despite what passes for conventional wisdom, there is nothing radical or un-American about holding these hearings. ... This committee cannot live in denial of (radicalization of Muslims)." Watch King explain the intent of the hearings.

10 a.m. ET: Ellison, the first Muslim to be elected to Congress, said that the hearings are misguided because they are about the Muslim "community." Congress should be addressing individuals and discussing their unique motivations in order for officials to conduct a "thorough, fair analysis" of the problem of domestically stoked terrorism, he said. "I share the chairman's concerns (about home-grown terror)," Ellison said. "It's true that specific individuals, including some who are Muslim, are violent extremists. However, these are individuals, not communities. When you assign (individuals' actions) to the entire community, you assign blame to the whole group."

10:15 a.m. ET: Ellison broke down in tears as he told the story of a Muslim American who tried to save lives on 9/11 and died. Watch Ellison's emotional testimony. "After the tragedy some people tried to smear his character solely because of his (Muslim) faith," Ellison said, his voice breaking. "Some speculated that he was helping the attackers. ... He was a fellow American who gave his life for other Americans."

10:30 a.m. ET: The Council on American-Islamic Relations, a prominent Muslim advocacy group, is "counter-productive and it is hurting the Muslim American community," Republican Rep. Frank Wolf of Virginia testified. He accused the group of "a campaign to intimidate and silence anyone who raises concerns about Muslim radicalization." Wolf said Thursday's hearings were important and necessary. "We cannot afford to be silent. We cannot disregard the issue of radicalization in our country."

10:35 a.m. ET: The radicalization of Muslim Americans is a "significant" problem that only the Muslim community can address and they must not claim victimization when concerns are raised, the president of the American Islamic Forum for Democracy testified. "We can close our eyes and pretend it doesn't exist," said Dr. M. Zuhdi Jasser, who is Muslim. "You're not going to solve the problem and the problem is increasing exponentially." Jasser called radicalization "a moral corruption within a certain segment" of Muslims in the U.S. which is manipulating Islam. Countering such efforts would require teaching Muslim Americans about American principles of liberty and "separation of mosque and state," he said.

Jasser said he supported having the hearings. "We can call everybody a bigot or an Islamophobe if they even talk about it, but radicalization is a problem that's increasing exponentially," he said. Jasser testified that his parents came to the U.S. from Syria because they believed they could worship freely as Muslims in America.

10:44 a.m. ET: Melvin Bledsoe, of Tennessee, gave testimony about his son Carlos Bledsoe who the father said was radicalized at a state college. Carlos Bledsoe changed his name to Abdul Hakim Mujahid Muhammad, and prosecutors say that in 2009, the young man shot and killed a soldier at a military recruiting center in Arkansas. Melvin Bledsoe talked about the confusion and anguish he and his wife experienced when their son came home for a visit from college and began acting odd. For example, he got into a heated argument about Islam with a relative, Bledsoe said, and his son removed all the pictures in his bedroom, including a photo of Martin Luther King, Jr. Carlos Bledsoe told his family that he had converted to Islam and that everything he would do would be to honor Allah, his father said. Melvin Bledsoe described his son's further indoctrination during the young man's experiences at a terror training camp in Yemen. Bledsoe blamed radical Muslim leaders in Tennessee for "brainwashing" his son, but that they were not the only people to be held responsible.

"We are losing American babies. Our children are in danger. We must stand up and do something about the problem," Bledsoe said. "I'd like to see something change that no other family in this great country of ours has to go through what our family is facing today."

11:30 a.m. ET: Sheriff Baca was asked what he would like to happen from an organized standpoint to better facilitate flow of information to law enforcement. He responded that he would like better coordination among law enforcement between local and federal entities. He said there must be a "best-practices" approach. "If you could look at a sub-committee that would allow for my colleagues to come in and talk," he suggested, referring to inviting federal investigators to testify.

11:40 a.m. ET: The hearings are "an outrage" because there is no factual basis for them, Rep. Sheila Jackson Lee, D-Texas, said. She said the hearings were unfairly targeting a group of Americans for their religious beliefs.

12:20 p.m. ET: Rep. Laura Richardson, D-California, called the hearings "discriminatory" and "an abuse of power." She questioned why other House committees weren't holding hearings on threats to American children involving other religions, a veiled but some say clear reference to the sex abuse scandal in the Catholic Church.

1:45 p.m. ET: Rep. Thomas Marino, R-Pennsylvania, before asking a question to those testifying, says the hearings are not about religion, but terrorism. "It's about people who kill men women and children in the name of religion," Marino said.

Marino, speaking of his experience as a U.S. attorney, said he once prosecuted a "home-grown terrorist" who is now serving a 30-year prison sentence, adding that it was the right thing to do. He then asked this question: "What do you expect from us - Congress? What should we be doing to promote the fact that this is not about religion, because I have many friends who are Muslims."

One testifier, a Muslim, said he hoped that Congress would "develop the political will to deal with this problem."

"As a Muslim, that's not offensive," he said.

Bledsoe answered that Congress should "call terrorism what it is."

1:50 p.m. ET: King has adjourned Thursday's hearing, telling those who testified that the committee may reach out to them later for additional questions, and if so, the testifiers would be asked to respond in writing.

2:12 p.m. ET: Speaking to reporters after the hearing, King says it was an "extremely productive and worthwhile hearing," and he is "more convinced than ever" that it was an appropriate hearing to hold.

Rep. Dan Lungren, R-California, tells reporters that the hearing helped "get facts out on the table" regarding what Muslim Americans go through when they want to fight radicalization and promote moderation.Â

2:25 p.m. ET: Jasser,Â the Muslim doctorÂ who testified at Thursday's hearing, tells reporters at the post-hearing news conference with King and Lungren that he hopes this is a beginning of a conversation, and that as someone who loves his faith, he believes there is "nothing more Islamic, nothing more Muslim" than figuring out radicalization. He said a pathology exists among a small minority of Muslims, and that the United States needs a political will to deal with it, and a thoughtful communication process in which people refrain from calling the examination "Islamophobia." He said there are people in the Muslim American communityÂ who want toÂ address radicalizationÂ but who have not had the resources and opportunity to do so.

Â Added Bledsoe, also at the news conference: "I donâ€™t understand why we have so much fear about talking about what its real. â€¦ It came to my doorstep. We need to talk about it."

11:18 am ET May 12, 2021 RETWEET
She didnâ€™t vote for Trump in 2020@Caitlyn_Jennerer tell@DanaBashCNNNN who is at her best alwaystwitter.com/danabashcnn/stâ€¦Uh
sarasidnerCNN