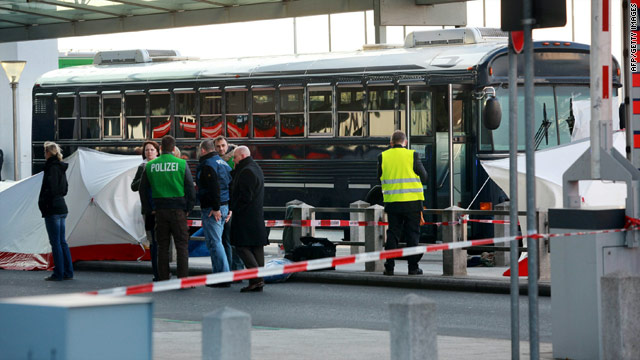 Police work around a U.S. military bus after the March 2 shootings at Frankfurt Airport in Germany.
March 10th, 2011
07:47 AM ET

A week after a gunman killed two U.S. service members aboard a bus at Germany's Frankfurt Airport, the U.S. military has stopped using blue American-style school buses to transport troops, the newspaper Stars and Stripes reports.

The distinctive buses were criticized as "obvious targets for terrorists," according to the Stripes report.

Frankfurt Airport officials told the newspaper the blue buses have not been seen at the facility since the shooting, which left two U.S. airmen dead and two wounded.

Americans are still being shuttled from Ramstein Air Base to the Frankfurt airport using German buses, the report said.

The driver of the bus, Airman 1st Class Zachary Cuddeback, 21, of Stanardsville, Virginia, and Senior Airman Nicholas Alden, 25, of Williamston, South Carolina, were killed in the attack.

Is it so very wrong to let off a bit of steam? cnn.it/2YczU1r
cnni