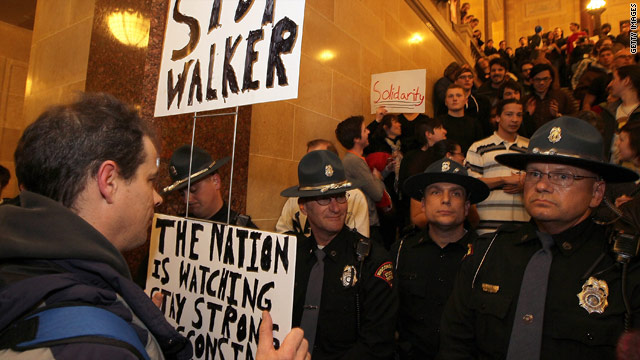 Protesters vie to get into the Wisconsin state capitol for Thursday's vote.
March 10th, 2011
08:29 PM ET

Outrage and frustration erupted outside the Wisconsin state capitol as scores of protesters tried to push their way inside the building before today's controversial vote.

Eager to get inside to make their voices heard during the vote, they chanted and screamed "Let Us In" and "Shame" to guards standing at the door. Some pounded on the door's windows, others tried to sneak in through windows with the help of friends inside.

The Capitol building was on total lockdown for almost two hours. We saw two Democratic legislators turned away at the door. Civil rights activist Jesse Jackson was also not allowed inside at first.

The tension escalated quickly and for a moment it felt like the situation was going to erupt into fist-flying brawl between the officers and protesters.

We were caught in the middle of the large swarm trying to barrel its way past police officers barricading one of many doors into the Capitol. A handful of livid protesters tried to rip the door open. One protester screamed in my ear "keep pushing forward, let's get in there." A couple of protesters were restrained by the Capitol police officers and pulled back before the scrum erupted into a more dangerous situation.

Eventually the officers were able to push the crowd back and shut the door again and regain control of the heated moment.

Environment Canada has issued its first "red alert" for British Columbia ahead of what officials are characterizingâ€twitter.com/i/web/status/1â€¦03
CNNweather