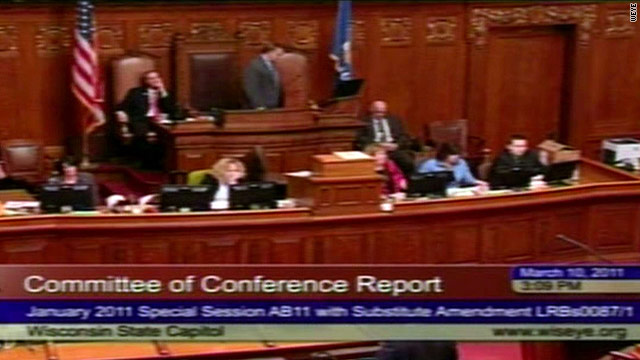 The Wisconsin state Assembly on Thursday afternoon passed a controversial bill that curtails most state workers’ collective bargaining rights, one day after state Senate Republicans used a technical procedure to get around the intentional absence of 14 Democrats and pass the measure in their chamber.

Throngs of people upset at the developments have been protesting on the grounds of the Capitol throughout the day.

The bill will reach Gov. Scott Walker's desk for final approval. The bill would, among other things, allow public workers to collectively negotiate wages only and bar unions from taking dues from public workers’ checks. Walker has argued the bill is necessary to help the state correct its deficits and avoid massive layoffs and property tax hikes.

Here is a running account of some of the latest developments:

4:33 p.m. ET: Still debating the bill, Democrats in the state Assembly are arguing that the Senate's move to pass the measure yesterday was illegal in part because the bill still addresses fiscal matters.

Senate Republicans, before passing the measure yesterday, stripped the bill of appropriations so that they could vote for the bill without a quorum. This way, they could vote without the presence of the 14 Democrats who fled the state.

4:04 p.m. ET: Although Democratic state Sen. Jim Holperin apparently is returning to Wisconsin, one of his fellow Democrats in the state Senate, Sen. Kathleen Vinehout, says she and other Senate Democrats are staying in Illinois. She says the matter of whether the Wisconsin Senate legally passed the measure last not hasn't been settled.

She said that because the legality of the Senate's move last night still has to be determined, she and other Senate Democrats still will stay away from Wisconsin because they don't want to be forced to appear in the Senate to deal with the measure.

Vinehout told CNN's Brooke Baldwin that she doesn't know where Holperin is, but she said that if he is on his way back to Wisconsin, he doesn't have the most current information. She added that the courts will need to decide whether yesterday's "legislative trickery" by Senate Republicans was legal.

3:58 p.m. ET: State Sen. Jim Holperin, one of the 14 state Senate Democrats who left the state last month in an attempt to prevent the Senate from voting on the measure, has told CNN he did so because the public needed time to digest what was being voted on, and because he thought a compromise was possible.

Holperin said he has left Illinois, where he and the other Democratic senators had been staying, and is on his way back to his district in Wisconsin.

3:32 p.m. ET: The Assembly is discussing the measure. Assembly Minority Leader Peter Barca, a Democrat, has told fellow lawmakers that "the charade is up," saying the argument that the bill helps fix Wisconsin's budget is bogus.

3:04 p.m. ET: Regarding the possible recall elections that CNN legal analyst Jeffrey Toobin mentioned below: Wisconsin residents who are angry about the saga of this measure - whether angry at Republicans for pushing it, or at the Democratic senators who fled the state last month in an attempt to avoid a vote - are talking about holding these to force some legislators out before their terms are up.

3:02 p.m. ET: Toobin notes that if the legislature's actions are found to have violated open-meetings law, the legislature - dominated by Republicans who want to pass the bill - will just pass it again. "The composition (of the legislature) is not going to change unless there are recall elections," Toobin said.

3 p.m. ET: Regarding whether Republican lawmakers are violating open-meetings law to push the bill through, CNN legal analyst Jeffrey Toobin says its tough to tell, because there seem to be arguments for both sides. However, he says, this is more a political controversy than a legal controversy. "The courts will get involved, but ultimately the Wisconsin voters will decide" whether this bill will stay in effect (assuming the bill passes today).

- CNN's Ed Lavandera and the CNN Wire contributed to this report.