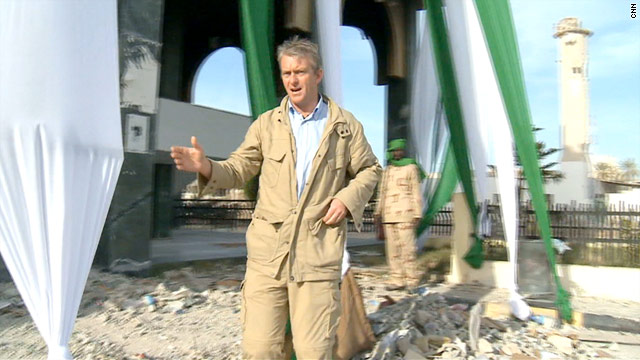 For a few moments today, for us personally, Libyaâ€™s lies and deceit were swept aside and the real deal was brutally exposed.

â€śItla, itlaâ€ť - "Get in the car, get in the car!" - he was screaming. My cameraman, Khalil Abdallah, and I hesitated for a split-second. But that's all it was.

We are free to go anywhere, any time, talk to who we want, when we want. That's what Moammar Gadhafiâ€™s son told me, that's what Libya told the U.N. We already knew it was all lies - look at any number of our colleagues, arrested, detained, in some cases, beaten - but today it came home to us personally.

These are Gadhafiâ€™s enforcers. They were looking for us.`

But it was too late. They'd been spotted, blocked, and stopped, and as I watched, Tommy was forced out of the car, kicked by another thug who already had his AK pointed at Tommyâ€™s face.

The violent invective started again. "You should go to Palestine and film what the Israelis are doing. You should leave Libya, go to Afghanistan, report whatâ€™s happening there," "Libya mia mia," repeating a chant weâ€™ve heard many times, meaning Libya 100%.

Another official waiting for us, one I'd not seen before, was more aggressive, telling cameraman Khalil: "If youâ€™ve shot anything, I'm going to take you to the airport and deport you."

It took a long time to convince him Khalil hadn't shot any footage. Some journalists we talked to were inside the mosque when they were arrested. How they got out of that threat, I donâ€™t know.

I still donâ€™t know whatâ€™s happened to him. Our ordeal is over, but I fear his may only just be beginning.

Thatâ€™s the reality of life here under Gadhafiâ€™s rule.