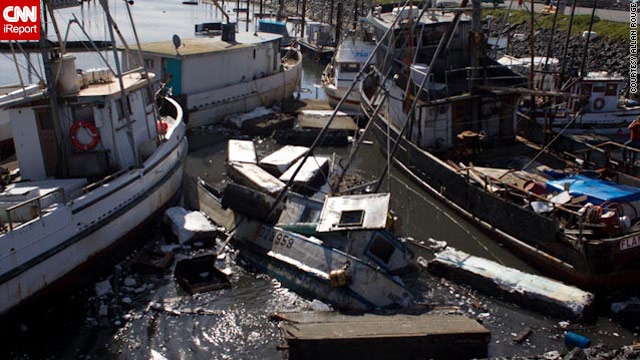 Rain and high winds hindered clean-up efforts in coastal communities along the West Coast of the United States and Hawaii after a tsunami triggered by Friday's earthquake destroyed harbors and swept out to sea at least three people and dozens of boats.

The National Weather Service on Saturday canceled tsunami advisories for the immediate coastal areas of central and Southern California, while warning residents of continued tidal surges in harbors across the region. But assessment of the damage was just beginning.

Local officials put damage estimates to harbor facilities in the millions in two seaside communities along the Oregon-California border hit hardest by the surge, which originated some 5,000 miles away.

Residents of Crescent City, California, and Brookings, Oregon, were spared the extent of devastation wrought in Japan, where the death toll continues to rise and a state of emergency has been declared at a power plant. A tsunami warning was declared in many American jurisdictions minutes after the earthquake hit, prompting evacuations and emergency measures, which effectively minimized damage.

In Crescent City, surges reached 8 feet Friday when the tsunami came ashore, dragging boats out to sea as some residents were evacuated to higher ground.

By Saturday, they were able to return to their homes, but the harbor was still littered wreckage of boats and docks, said CNN iReporterÂ Kristoffer Strom,Â head animal trainer and manager of Ocean World in Crescent City.

"The weather was windy with rain, not like the day of the tsunami - that was sunny. I'm sure this will make clean up harder," said Strom, who shot this video of the harbor Saturday. "They are not letting cars in except for people that need to be the to take care of boats or things like our harbor pump. Only people on foot can get in other wise."

Across the border in Oregon, a massive surge destroyed almost all the docks in Brookings Harbor and destroyed boats, causing millions of dollars in damage, according to CNN affiliate KTVL in Oregon.

"Brookings and Crescent City took the brunt of this on the West Coast, and as you can see, there's millions of dollars in devastation," Sheriff John Bishop with Brookings Police said.

Seven boats were swept out to sea unmanned, and three of them sank, Bishop said.

Lester Cramer, who lives near the harbor, had just spent thousands of dollars to repair his boat. Now, part of the dock is sticking through it.

"Water came rushing in... boats started swirling around in circles, tearing everything apart," he said.

A brother and sister were lucky to be alive after being swept into ocean as they walked along the coastline in Curry County, Oregon, Oregon State Police said. The two had been camping in the area and were unaware of the tsunami warning.

A California man who had gone to the beach in Del Norte County, California, to take pictures was not so lucky. He had been standing on a sandbar at the mouth of the Klamath River when he was washed away, a county spokesman said. Two of his friends were carried off as well, but were able to return safely to shore.

In nearby Santa Cruz,Â the surges tore boats off their moorings and rocked them into piers and each other, CNN affiliate KGO-TV reported.Â An estimated 20 to 30 boats sunk, and hundreds more were damaged. One Santa Cruz County supervisor estimates $14 million in damage.

In Hawaii, Gov. Neil Abercrombie signed a "state of disaster proclamation" that will allow the state to get federal funds to rebuild an estimated $3 millionÂ damages to boat harbors, parks and other property. He said the figure is likely to grow.

The Big Island suffered the most damage, in particular the west and northwest parts of the island, where roads were flooded and a home and several cars ended up in Kealakekua Bay, CNN affiliate KHON reported.

In Honolulu, the 2011 Honolulu Festival went on as planned except for theÂ cancellation of annual fireworks show, out of respect for the victims, affiliate KGMB reported.