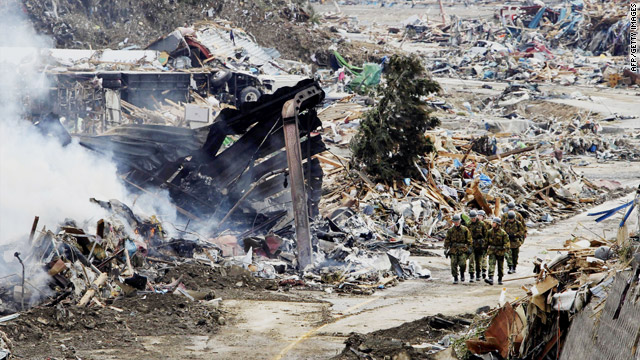 More than half of tourist town residents unaccounted for

A tiny tourist and fishing community on Japan's rugged Pacific coastline is missing more than half its residents following Friday's powerful earthquake, according to local government officials cited by Kyodo News Agency.

About 9,500 residents are unaccounted for in Minamisanriku, located in Miyagi Prefecture.  The village economy relies largely on tourism and commercial fishing, according to community websites.

Among its tourist attractions is a museum that boasts about 16,000 annual visitors and features dinosaur fossils and ancient traditional fishing gear. Chief industries in Minamisanriku include agriculture, forestry and fishing, the websites said.

Some of the more prominent fish hauled in from offshore include silver salmon, kelp, shark fin, tuna, abalone, oysters and scallops.

Click here to see the before and after images of the devastation in Soma and Minamisanriku, Japan.

One local website reports the local economy has been recently challenged by plummeting numbers of workers and competition from imported seafood. Farms in the region produce rice, vegetables and livestock, according to community websites.