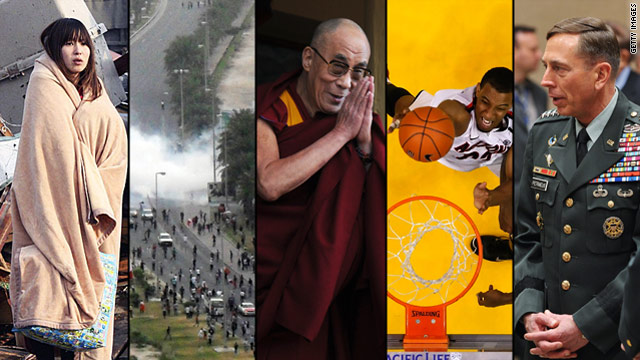 Walls of water decimated towns and drowned people in their vehicles. Homes were flattened or swept onto fields, and more than 1,600 are known dead, though thousands more are unaccounted for. The world is trying to grasp the scope of the devastation and the dangers still ahead after Friday's 8.9-magnitude earthquake and tsunami in Japan, whose prime minister has said his country is facing its toughest crisis since World War II.Â Here is a look at this and some of the other stories CNN plans to follow this week:

With the chances of survivability for the trapped and stranded dwindling with time, rescuers in devastated coastal towns in northeastern Japan are racing to save people. Forty-two were rescued on Sunday in the town of Minami Sanriku, where it's been estimated that about 9,500 people are unaccounted for.

Long lines for fuel and food persist not only in hard-hit northeastern Japan, but also in areas such as Tokyo, to the south. More than 1 million Japanese households are without power. And in those that have it, people are enduring rolling, intentional power blackouts meant to preserve energy - the country faces a 10 million kilowatt shortage - as workers try to repair damaged power plants.

Officials are particularly concerned about one damaged nuclear power facility. Workers are flooding two reactors at the FukushimaÂ Daiichi nuclear plant with seawater to cool radioactive material and prevent meltdowns after the earthquake and tsunami damaged theÂ reactors' cooling systems.Â The Japanese government says it's operating on the presumption that there's been a partial meltdown inside the reactors, and officials are keeping an eye on other plants where elevated radiation levels have been detected, but nuclear experts say they believe the possibility of massive radiation exposure is low for now.Â At least 30,000 people living within 10 kilometers of the Fukushima plant have been ordered to evacuate.

Japan still has a high chance of a magnitude-7.0 quake or above in the next three days because of increased tectonic activity, the earthquake prediction department chief for the Japan Meteorological Agency said.

CNN.com has much more on the catastrophe in Japan. Learn how you can help the aid effort, and take a look at a gallery of photos of the damage and the recovery efforts.

World leaders are continuing to debate a possible no-fly zone over Libya as forces loyal to Libyan leader Moammar Gadhafi are claiming victories in a civil war there.

On Sunday, Libyan state TV reported that the opposition-held town of al-Brega had been "cleansed from the criminal gangs and mercenaries." Gadhafi's forces have been fighting to recapture towns from rebels since an uprising began nearly five weeks ago.

The Arab League over the weekend voted to ask the U.N. Security Council to enforce a no-fly zone over Libya "to protect the civilian population" from air attack. Such a zone also would protect rebels from Gadhfi's air force. Western powers have said any no-fly zone would have to have regional support and a clear mandate from the United Nations, and U.S. President Barack Obama has said he "won't take (the) decision lightly" on whether to use military force, including helping a no-fly zone.

Unrest in other parts of Africa and the Middle East will still be in focus this week, including in Bahrain, where tense protests against the royal family led to clashes and injuries on Sunday.

In Yemen, security forces and anti- and pro-government protesters clashed over the weekend, despite the president's pledge to bring a new constitution to a vote by the end of the year. These countries' demonstrations were triggered in part by popular protests that brought down the longtime leaders of Tunisia and Egypt earlier this year.

U.S. President Obama welcomes Danish Prime Minister Lars LÃ¸kke Rasmussen to the White House on Monday afternoon. Among other items, the two leaders will discuss economic issues and the unrest in Africa and the Middle East. The Scandinavian nation will hold the presidency of the European Union in 2012.

U.S. Congress may stave off shutdown by another three weeks

The U.S. Congress faces a Friday deadline to at least come up with another stopgap spending bill or shut down nonessential government services.

Republicans and Democrats this week appear poised to pass a measure that would cut an additional $6 billion from current spending levels and keep government operating for three more weeks. A previous two-week extension that expires Friday included $4 billion in cuts.

These continuing resolutions are in the place of a proper 2011 spending plan, which Congress has yet to pass because of disagreements over how much spending to cut. House Republicans most recently sought cuts of $57 billion from current spending, which the Democratic-controlled Senate has rejected.

U.S. Army Gen. David Petraeus this week returns to Capitol Hill for the first time since taking command of Â coalition forces in Afghanistan eight months ago. He is expected to present an improved outlook for the operation in the central Asian country.

Haiti this week will prepare for Sunday's presidential runoff between former Haitian first lady Mirlande Manigat and popular musician Michel Martelly. Â The Caribbean nation's efforts to recover from a devastating 2010 earthquake have been compounded by a cholera epidemic and political chaos sparked by allegations of fraud in the presidential elections held in late November.

Tibet's government-in-exile on Monday will begin considering whether to accept the Dalai Lama's proposal to relieve him of his political responsibilities.

The Dalai Lama, who would remain the spiritual head of the Tibetan people, has proposed shifting his political power in the Tibetan exile movement to an elected representative. The Tibetan parliament is scheduled to meet Monday in Dharamsala, India.

Get your brackets ready

One of the biggest spectacles in American sports begins this week. The NCAA men's basketball tournament field was set Sunday evening, with Ohio State, Kansas, Pittsburgh and Duke earning No. 1 seeds. Which team is going to wreck fans' brackets this year? CBS analyst college basketball analyst Greg Anthony talks to SI.com aboutÂ some of the under-the-radar teams he's watching.