Jon Rahm wins the US Open at Torrey Pines. This is Rahm's first-ever win at a major championship, and he's the firsātwitter.com/i/web/status/1ā¦js

A suspect has been charged with murder after the death of Catherine Serou. She vanished in the country's Nizhny Novātwitter.com/i/web/status/1ā¦vA

Nine children and one adult were killed in a crash involving a girls ranch vehicle on Alabama's I-65 during stormsātwitter.com/i/web/status/1ā¦el

A Wichita Police officer was wounded and a suspect was killed in a shooting during a "check welfare call," police sātwitter.com/i/web/status/1ā¦fF

An off-duty deputy's wife and his 4-year-old stepdaughter were shot when a gunman forced entry into their home andātwitter.com/i/web/status/1ā¦5U

A tropical storm warning has been issued for large swaths of the North Carolina coast as Tropical Depression Claudeātwitter.com/i/web/status/1ā¦7J

Arizona police shot a suspect who they say struck multiple cyclists with a vehicle during a bicycle race, leaving sātwitter.com/i/web/status/1ā¦yt 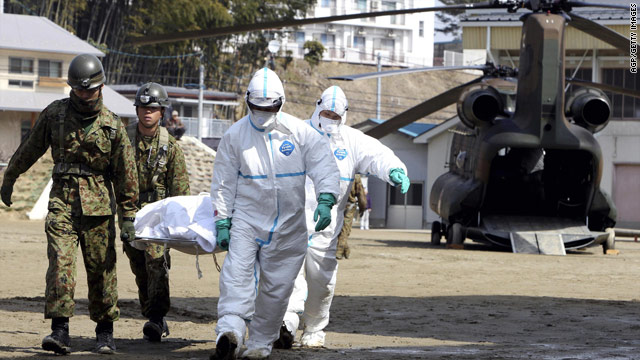 A person who may have been exposed to radiation is carried by soldiers Sunday at a radiation treatment center in Japan.
March 13th, 2011
01:30 PM ET

U.S. agencies provide insight into how to prepare for, respond to nuclear disaster

Disasters like those at Three Mile Island and Chernobyl long ago prompted nations with nuclear power plants to ensure detailed plans are in place in case of an emergency.

With potential crises unfolding at two nuclear plants, Japanese authorities have evacuated tens of thousands of residents from the danger areas.

A handful of people have tested positive for high radiation levels on their skin and clothes, and the Japanese government is working to distribute potassium iodide to residents near the reactors.

Potassium iodide blocks the thyroid glandās absorption of radiation, and the U.S. Nuclear Regulatory Commission urges states to consider including the pills as a protective measure for anyone in the 10-mile emergency planning zone surrounding a nuclear power plant.

There is no indication the U.S. has been or will be affected by Japanās nuclear troubles, but advice and regulations from U.S. government agencies provide insight into how JapanĀ might respond to the damaged reactors.

The Federal Emergency Management Agency says anyone living within a 10-mile radius of a commercial nuclear plant should receive annual emergency information updates from the government or power company.

Residents being told that a nuclear disaster is imminent should await local emergency announcements before deciding whether to flee or seek shelter. Those told to evacuate should put as much distance as possible between themselves and the source of the radiation.

While evacuating, keep car windows closed and use recirculating air inside the car. Be sure to bring a flashlight, portable radio, batteries, first-aid kit, can opener, essential medicines, cash, credit cards and a supply of sealed food and water, the Centers for Disease Control and Prevention advises.

The U.S. Environmental Protection Agency also suggests purchasing a radiation detection meter and wearing a well-fitting mask, because inhaled and ingested radiation are the most damaging to living tissue.

āRadioactive particles may lodge in the lungs or digestive tract and release radiation directly to living tissue for a lifetime,ā the agency says.

Depending on the wind speed and the size and direction of the radioactive plume, it may be safer to seek shelter than to evacuate. If evacuation is not advised or feasible, āthe more heavy, dense material between you and the source of the radiation, the better,ā FEMA advises.

Remember to shut off fireplace dampers, air conditioning, ventilation fans, furnaces and any other air-intake mechanisms in your home. If possible, seek shelter in a basement or other underground space. If there isnāt one, go to a room in the middle of your home or workplace, the CDC suggests.

Close and lock all doors and windows and keep a battery-powered radio handy, FEMA says.

If you think youāve been exposed to radiation, take a thorough shower, change your clothes and shoes, put the exposed items in a plastic bag, seal it and āplace it out of the way,ā the agency says.

The CDC warns that signs of radiation exposure may not be evident for years. The effects could be as mild as skin reddening or as serious as cancer or death, depending on the amount of radiation absorbed, the type of radiation and the length of time the person was exposed.

9:11 pm ET June 20, 2021 RETWEET
Scientists have discovered a new species of dinosaur which they confirmed as the largest to have ever been found inātwitter.com/i/web/status/1ā¦st
cnni

9:00 pm ET June 20, 2021 RETWEET
Jon Rahm wins the US Open at Torrey Pines. This is Rahm's first-ever win at a major championship, and he's the firsātwitter.com/i/web/status/1ā¦Vb
cnni

8:15 pm ET June 20, 2021 RETWEET
The summer solstice is just a few hours away, marking the first day of summer. Here's how people celebrate around tātwitter.com/i/web/status/1ā¦Od
CNNweather