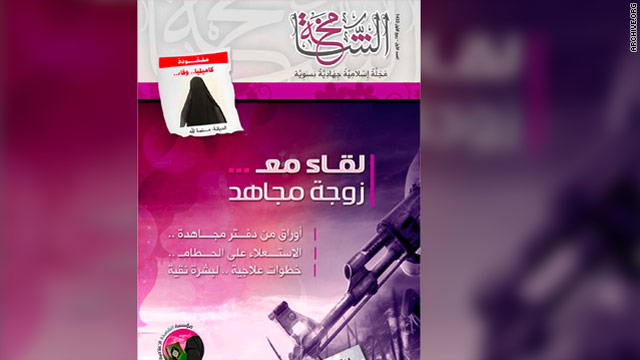 For those women who felt left out by previous jihadist magazines, the people behind a new publication may think they have an answer.

The newly released Arabic-language Al-Shamikha magazine mixes advice on beauty and fashion with instruction to raise children to be ready for jihad, according to Britain’s Daily Mail and the Independent.

The magazine’s 31-page inaugural issue advises not only on how women can aspire to a fine complexion - in part by keeping their faces covered and staying indoors when possible - but also how to land a great catch of a man among the mujaheddin, according to the Independent.

Also, “readers are told it is their duty to raise children to be mujaheddin ready for jihad,” and one article tells readers to give their lives for the fight against the enemies of Islam, the Daily Mail reports.

The publication - whose cover features a machine gun and an image of a veiled woman - also features interviews with women who praise their husbands who died in suicide attacks, according to the Daily Mail.

Al-Shamikha is distributed by the same al Qaeda media wing behind the English-language Inspire magazine, which debuted last year, the Daily Mail and the Independent report.

Inspire, geared toward Westerners who might be interested in the jihadist cause, is an online publication of al Qaeda in the Arabian Peninsula that includes advice on how to build bombs and encrypt messages. Inspire’s inaugural issue had an article titled "Make a Bomb in the Kitchen of Your Mom."