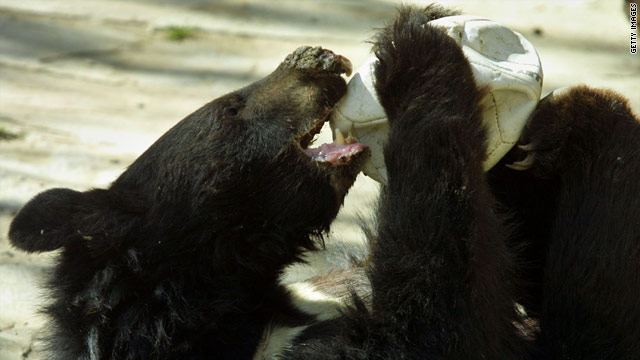 The "rules of the hunt" law prevents Asiatic black bears from being hunted during winter months, when they hibernate.
March 16th, 2011
10:10 PM ET

Hunters in Russia will no longer be allowed to rouse hibernating bears  from their dens and shoot them under new legislation enacted Wednesday, according to an animal rights group.

The winter den hunt left bear cubs orphaned, often resulting in their deaths, said the International Fund for Animal Welfare, which has been campaigning to end the practice since 1995.

The new law reduces the hunting season for brown bears and Asiatic black bears and excludes the winter season, when the animals are hibernating in dens, the group said Wednesday. Under the new law, it is also illegal to hunt cubs less than a year old and females with cubs under one year.

"The 'rules of the hunt' legislation is a tremendous step forward for animal welfare in Russia and reflects the opinion of the Russian people that bears should be protected from this sort of hunting," said Maria Vorontsova, director of IFAW Russia.

To date, the group says it has successfully released more than 150 cubs from its rehabilitation center in Bubonitsy, Tver region.