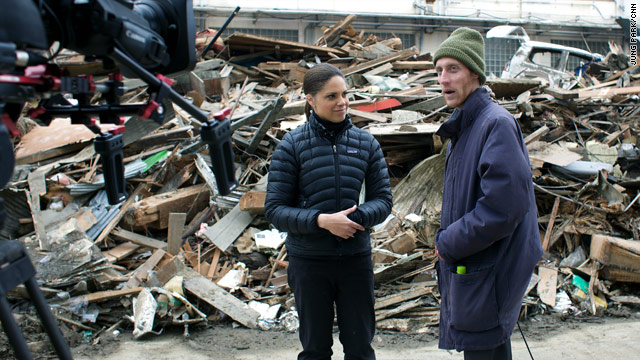 American survivor in Japan has long-distance TV reunion with parents

Under cold and overcast skies, a ferry pulled into the harbor in Kesennuma, Japan. The captain shouted to people on the shore to grab a rope and help tie down his boat.

With the dock underwater, crushed by Friday's tsunami, this is the only way the ferry has been able to return to service. Dozens of people, wearing masks and carrying bags, load onto the boat for the 20-minute trip to Oshima island. For many, this is the first time to get to their friends and loved ones who have been stuck on Oshima since the earthquake. American Paul Fales was one of the first passengers off the ferry from Oshima. A slight man of 25, he looked pale, cold and anxious as he made his way off.

He'd ridden out the massive earthquake in the elementary school where he was an assistant English teacher. High ground protected the students when the tsunami rushed in, and he was back in Kesennuma to see how his apartment had survived. In spite of the debris around him, he was confident.

"I think it will be fine, really," he said. But that short walk would prove challenging ‚Äî the streets impassable and filled with water, debris and mud. A roof fell into the center of another street, and we couldn't get around it. We turned back again.

A voice called, "Paul!" A woman in a flannel jacket, with a hat jammed over her ears, ran across the street and hugged him. "You're OK!" she said. She started crying as she hugged him, and started to list their friends that she knew had survived. Rachel Shook is also an assistant teacher.

In her late 20s, she works at several schools in Kesennuma. She's also Paul's neighbor. She's become the neighborhood's unofficial person in charge of keeping track of the people who live in their apartment complex. A Dry Erase board on her front door is updated with names. This time, it's Paul's name she scrawls above "is okay."

To get to his front door, Paul has to climb over a giant piece of plywood full of nails that is leaning haphazardly against his doorway. It crunches and splinters as we climb over. Paul has his house key, and he uses it, even though his back window is smashed open and it would be easier to just walk in that way. The door opens.

"It's a disaster," Paul says. The washing machine has been heaved onto the floor, and another door has been ripped off its hinges. The water line, speckled with debris, is up to our heads.

But Rachel is optimistic. "At least we have the second floor," she says to Paul. "Some people lost everything."

Paul digs in a closet, looking for his medicine and any food he can salvage. There is almost nothing.

Outside, Paul asks to use my satellite phone to call his parents. He hasn't gotten word to them, and he knows they must be worried. We agree and ask him to join us live on Anderson Cooper's show "AC360¬∞". He agrees, and we call New York to tell Anderson's producers that we will have a young American as a guest. The producer's voice is disbelieving.

"Oh my God," she says. "They found the kid!" It turns out that Paul's parents, Mary and Peter, have already been booked to be guests on Anderson's show. They have been desperate to find their son and were going on television to plead for any information about him. They were about to get a lot more than information.

We handed our satellite phone to Paul just before the broadcast, but he was unable to reach his dad or mom.

A few minutes later, we were able to connect Paul to his mother and father on live TV ‚Äî and capture their reunion.

"Hi, sweetheart. We love you. We are very proud of you."

It was one joyous ending amid all the sadness and rubble.

4:44 am ET January 27, 2021 RETWEET
Close to half of Americans say they are eager to get a coronavirus vaccine or have already gotten one, according to‚Ätwitter.com/i/web/status/1‚Ä¶DU
cnni

4:30 am ET January 27, 2021 RETWEET
January has already become the worst month for US Covid-19 deaths since the start of the pandemic. cnn.it/3po4gdg
cnni

4:00 am ET January 27, 2021 RETWEET
A team of World Health Organization investigators is preparing to leave quarantine in the Chinese city of Wuhan and‚Ätwitter.com/i/web/status/1‚Ä¶xZ
cnni