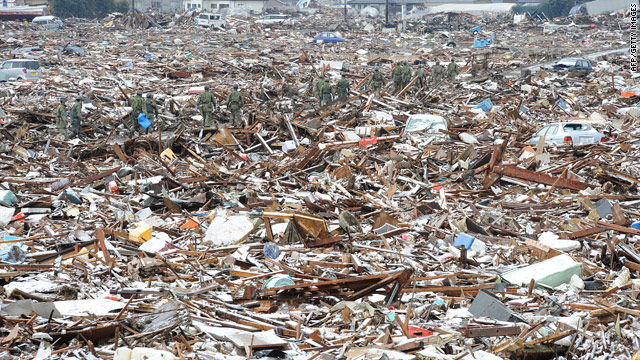 Helicopters dump water on Japan nuclear plant: Helicopters dumped water Thursday on and near the Nos. 3 and 4 units at Japan's Fukushima Daiichi nuclear plant in the latest attempt to halt the nuclear accident that appeared to be spinning out of control. The helicopters belong to the nation's self-defense forces, public broadcaster NHK reported.

'Never give up hope,' Japan's emperor says: Thousands of Japanese filled evacuation shelters or joined foreigners seeking a way out of the country Thursday in the aftermath of last week's devastating earthquake and tsunami.

After disasters comes the exodus from Tokyo: Mid-March is not a high travel season for Japan, but as the nuclear emergency at Fukushima nuclear plant persists, the airports are growing clogged with passengers.

$5 ATM fees coming our way? ATM fees are on the rise at some of the country's biggest banks.