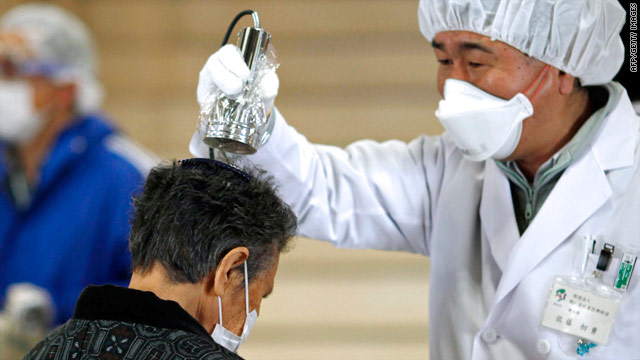 A woman is scanned Thursday at a radiation screening center in Koriyama, Japan, 37 miles from the stricken nuclear plant.
March 17th, 2011
11:18 AM ET

How bad is the nuclear threat in Japan?

Experts cannot agree on how dangerous Japan's nuclear crisis is.

The International Nuclear and Radiological Event Scale ranks incidents from Level 1, which indicates very little danger to the general population, to Level 7, a "major accident" with a large release of radioactive material and widespread health and environmental effects.

"It's clear we are at Level 6, that's to say we're at a level in between what happened at Three Mile Island and Chernobyl," Andre-Claude Lacoste, president of France's nuclear safety authority, told reporters Tuesday.

"This is not going to end well," said Joseph Cirincione, president of the Ploughshares Fund and author of "Deadly Arsenals: Nuclear, Biological and Chemical Threats. "At the very least, we're going to have a very expensive mess to clean up, and the worst is that we spread radioactive particles across hundreds or thousands of square miles of Japan."

As an indication of what it thinks of the danger, the U.S. military will not allow troops to get within 80 kilometers (50 miles) of the damaged plant. The Japanese government has told people to evacuate to at least 20 kilometers (12 miles) away from the damaged reactors.

Governments of other countries are taking precautions and conducting thorough inspections of food from Japan, looking for radioactive contamination.

"The concerns I have are for the workers in the plant," said Greg Evans, a professor of chemical engineering at the University of Toronto. "They are putting in a very heroic effort, and there is the potential that they are being exposed to high levels of radiation because of their efforts to maintain and to control the accident that's occurring. And to be blunt, it is a very serious accident.

"However, outside the plant, the releases so far have not been excessive in terms of health. ... They've evacuated to 20 kilometers, which seems like a very reasonable precaution."

Dr. Sanjay Gupta, CNN's chief medical correspondent, said his radiation exposure had quadrupled in the 36 hours he'd been in Tokyo, but said that amount was about what he would normally be exposed to every year anyway.

Japan's Chief Cabinet Secretary Yukio Edano said radiation levels had spiked after an explosion and fire Tuesday at the Fukushima Daiichi plant's fourth reactor, but he later told reporters that readings at the plant's gate had returned to a level that would not cause "harm to human health."

But Glenn Sjoden, a professor of nuclear engineering at Georgia Tech in the United States, told CNN that the radiation levels were extremely serious.

"Things have dramatically changed in the last few days. Initially they were recording slightly elevated levels at the site boundary because they were venting small pumps from the buildings to release pressure.

"The situation is very different now as a fraction of the core has melted, releasing some fission products to the atmosphere as they continue to relieve the pressure in the system."

Dr. Ritsuko Komaki, a radiation oncologist with the University of Texas' M.D. Anderson Cancer Center said the real concern lies with long-term effects of radiation, which can cause cancers such as leukemia years after exposure.

"I am very concerned about the babies and the children who are growing up in the area (of the stricken plant)," said Komaki, who was 2 years old when the atomic bomb was dropped on her hometown of Hiroshima in 1945. "They have to be maybe evacuated far away."