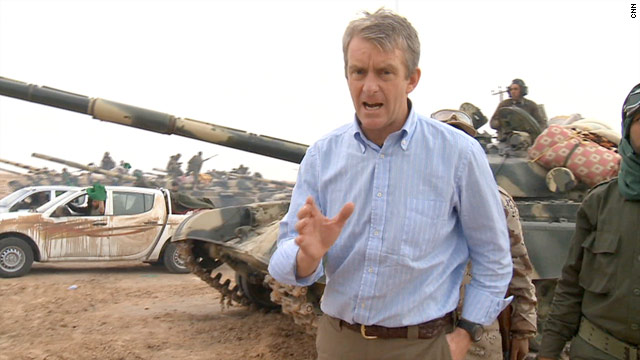 CNN Senior International Correspondent Nic Robertson gave an account last week of how forces loyal to Libyan leader Moammar Gadhafi detained him and his crew, along with the taxi driver who had given them a ride. This is his update on the taxi driver:

The day after government gunmen brutally detained us, we were told our innocent taxi driver had been released.

We'd last seen him being driven away by the same thugs who'd bundled us into their cars and dumped us at our hotel gates. He was shaking, could barely speak, appeared traumatized by the utter bad luck that had befallen him for simply giving us a ride.

In any other country, his behavior would be treated normally. He was a taxi driver stopping to give potential fare-paying passengers a ride.

But not here. Not in Libya.

We followed up the next day and were told he had been released. Even then, it didn't ring true, but it was the best information we had.

Now it turns out to have been a lie. Our taxi driver is still locked up.

A source who would face problems if we identified him tells us he knows the driver's family and they say he's yet to come home. Worse, the source has confirmed that the driver is being held in Tripoli's criminal investigation headquarters with rebel suspects and other taxi drivers picked up with reporters.

This is the same detention and investigation center we were taken to two days ago to interview an alleged rebel suspect. He'd been held for more than a week and looked tired, haggard and mentally broken.

We have been told our taxi driver is low priority. The government is busy processing alleged rebels. When they get to our taxi driver, we are told, he should be released quickly.

Seeing is believing, I say. But in the case of this driver, I'm not even sure that's a good idea. Any connection with us could send him back to jail.

We are going to keep pressing for his release. He gave us a ride. How that is grounds for him and his family to be subjected to abuse of his basic rights is beyond my comprehension.

It casts ever more troubling doubt over anything we see here.

A huge statue of Jesus Christ is under construction in southern Brazil, and it will be even taller than its famous‚Ätwitter.com/i/web/status/1‚Ä¶QC
cnni

1:00 pm ET April 13, 2021 RETWEET
Our solar system boasts a diverse range of planets, but some of them may share a common phenomenon with Earth: rain‚Ätwitter.com/i/web/status/1‚Ä¶QG
cnni

12:44 pm ET April 13, 2021 RETWEET
@donie Lol. We also see too much. Work way too much. And are under too much pressure. But it‚Äôs the work I chose ovetwitter.com/i/web/status/1‚Ä¶jOxb
sarasidnerCNN

12:33 pm ET April 13, 2021 RETWEET
Despite a tumultuous period on and off the pitch, Barcelona is now the most valuable soccer club in the world, acco‚Ätwitter.com/i/web/status/1‚Ä¶w7
cnni