The US puts sanctions on the Saudi Rapid Intervention Force known as the "Tiger Squad" and on a Saudi former intellŌĆtwitter.com/i/web/status/1ŌĆ”ND

A long-awaited declassified US intelligence report on the killing of journalist Jamal Khashoggi finds the Saudi CroŌĆtwitter.com/i/web/status/1ŌĆ”5I

More new research suggests a single dose of the Pfizer/BioNTech coronavirus vaccine can protect against asymptomatiŌĆtwitter.com/i/web/status/1ŌĆ”DU 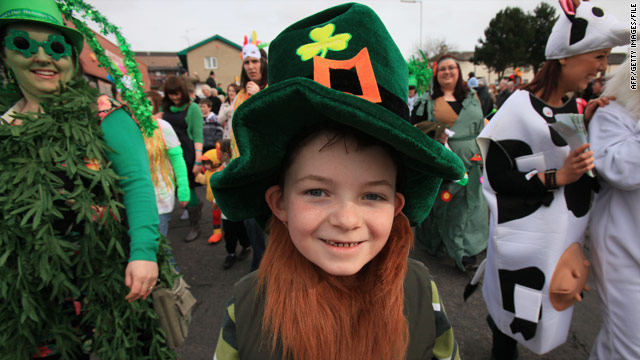 To Irish Catholics, St. Patrick's Day is not just a day for green beer and ridiculous hats. It's the feast day of their nation's patron saint.

According to Catholic.org, Patrick was born to Roman parents in occupied Scotland in the year 387. He was kidnapped and taken to pagan Ireland as a slave at age 14 but escaped and returned to Great Britain at age 20. He entered the Catholic priesthood and eventually became a bishop. In 433 he was dispatched back to Ireland, where he used a shamrock to illustrate the concept of the Holy Trinity. Virtually the entire population of the island converted to Catholicism.

The former player and current minor-league manager for the Atlanta Braves was expected to be released from an Orlando, Florida, hospital Thursday. Surgeons on Tuesday removed Salazar's left eye, which was severely injured by a foul ball last week.

Salazar, 54, was standing in the Braves dugout during a spring training game when a line drive off the bat of catcher Brian McCann struck him in the face and knocked him unconscious. It was initially feared that Salazar's life was in danger or that he would suffer brain damage.

"We're lucky he's alive," Braves General Manager Frank Wren said Wednesday. "Despite the best efforts of really skilled eye specialists here in Orlando, they were not able to save his eye."

Salazar, in his first year with the Braves organization, is expected to take up his managing duties with the team's Lynchburg, Virginia, farm team in four to six weeks, Wren said.

The senior pastor of the Crystal Cathedral in Garden Grove, California, has apologized for asking members of the church's music ministry to sign what some view as an anti-gay document, the Los Angeles Times reports.

The church asked all music ministry members to sign a covenant that included this paragraph:

"I understand that in an era where images of family relationship and personal sexuality are often confused, Crystal Cathedral Ministries believes that it is important to teach and model the biblical view. I understand that Crystal Cathedral Ministries teaches that sexual intimacy is intended by God to only be within the bonds of marriage, between one man and one woman."

Several choir members objected, and some threatened to quit the ministry.

Even the Rev. Robert H. Schuller, the church's founder and the pastor's father, was offended.

"I have a reputation worldwide of being tolerant of all people and their views," he told the Orange County Register. "I'm too well-educated to criticize a certain religion or group of people for what they believe in. It's called freedom."

Coleman backtracked Tuesday and issued an apology: "The church of Jesus Christ at large is grappling with the challenge of reconciling love and adherence to God's word, even those passages that challenge us," she said, according to the┬ĀTimes. "As the church has been engaging in this sensitive dialogue, people that we care for deeply have been hurt. We are sincerely sorry."

The name of Mary Jackson, NASA's first African American female engineer and one of the barrier-breaking inspirationŌĆtwitter.com/i/web/status/1ŌĆ”eI
cnni

11:03 pm ET February 26, 2021 RETWEET
With the combination of celebrity book clubs and a seemingly endless number of streaming services looking for conteŌĆtwitter.com/i/web/status/1ŌĆ”Ci
cnni

10:32 pm ET February 26, 2021 RETWEET
"Currently, there are simply too many unknowns to guarantee protection from SARS-CoV-2 at the 2021 Summer Games, shŌĆtwitter.com/i/web/status/1ŌĆ”WC
cnni

9:10 pm ET February 26, 2021 RETWEET
A woman came across a decades-old photo 15 years ago in a book she bought at a used book store. Hoping to share thŌĆtwitter.com/i/web/status/1ŌĆ”NC
cnni